Skip to Content
All activities require adult supervision. This post contains affiliate links. As an Amazon Associate and a participant in other affiliate programs, we earn a commission on qualifying purchases.
133 shares 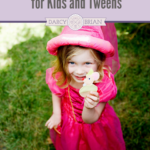 Disney Halloween Costumes are always a popular idea that lets kids and adults alike dress up.

We have quite a collection of princess costumes in our home for Halloween and everyday dress up.

This list of Disney costume ideas has something for everyone in your home. It includes popular ideas for kids, teens and tweens, and even the adults on your list!

Let the kids put on their favorite costume and enjoy watching 30 Days of Disney Movies with this printable schedule.

This post contains affiliate links. If you make a purchase, we may earn a commission at no extra cost to you.

These Disney Halloween Costumes are some of our personal favorites. This list is lengthy because I have included great ideas for a variety of ages.

We’ve included complete costume links and some fun accessories that can help you build a costume anyone would love. And don’t forget your Halloween makeup!

Cinderella: Remember the angst when the glass slipper got left behind? This classic costume is a favorite of many children.

Aurora aka Sleeping Beauty: She could only be awakened by true love’s kiss.

Snow White:  She is the princess who wore the beautiful dress with the puff sleeves and sometimes, this sweet-natured girl wore the red cape with the dress – but not always. You can get the costume with or without that cape and you can also get the Snow White costume thats more modern and has red leggings instead of a cape.

Jasmine:  The princess from the Middle East is a favorite of the fans of Aladdin. Add a pair of glittery ballet flats and a magic carpet for fun!

Little Mermaid:  Ariel is often worn by girls and adults alike as a great idea to celebrate the fantasy of mermaids!

Rapunzel:  Tangled is a more recent classic Disney princess movie that has created a love of long hair and purple dresses on girls for Halloween. If your little girl doesn’t have long hair, a long Rapunzel wig is a great way to make the costume complete.

Merida from Brave: An out of character princess that is popular for her fierce strength includes a green dress and brilliant red curly hair.

Tinker Bell:  Everyone loves the pixie fairy that was a favorite of Peter Pan! This is an easy costume to create with a bit of bright colored tulle, tights, and some wings. Or, a fun costume can be purchased to save time.

Vanellope Van Schweetz: Halloween is the perfect time to dress up as the princess of Sugar Rush, known for having candy in her hair.

Hades: The Hades in Descendants 3 gets a whole new look compared to Disney’s Hercules movie. He’s a little bit punk rock as the god of the Underworld. I made my son’s Hades Halloween costume and you can too.

Kylo Ren: Grab your lightsaber and get ready to face the newest Star Wars villain!

Lightning McQueen Pit Crew:  If you have a fan of the Cars movies, dressing like a member of the pit crew is a great choice for a Disney Halloween costume idea.

Nick Wilde:  Zootopia was a huge hit this year, and the fox Nick Wilde has become a popular boys costume this year.

Peter Pan:  Never grow up when you dress as Peter Pan for Halloween. Have fun flying around to gather candy with your best friend Tinker Bell.

Dash:  The Incredible’s son Dash makes a fast entrance everywhere he goes. Grab this costume for the boy that can’t sit still.

Jack Skellington:  Everyone loves the hero from Nightmare Before Christmas! This is a great fun costume that brings a bit of Christmas to Halloween.

Woody:  Toy Story is a classic film that everyone loved watching with their kids. Dress up as Woody and let your son say, “there’s a snake in my boot!”

Disney Descendants: Evie, Mal, or CJ are Disney Descendants that have become really popular in the last few years, and thus became super fun Disney Halloween costumes choice for tweens and teens. These characters are top picks this year.

Mike Wazowski:  Monsters Inc. and Monsters University are tons of fun, and going dressed as Mike Wazowski is a great way to make everyone laugh.

Captain Jack Sparrow:  The Pirates of the Caribbeans is always popular, and what teenager doesn’t enjoy dressing like a pirate?

Minnie Mouse:  You can’t go wrong with a classic costume like Minnie Mouse! Whether you dress in pink and white or red and white polka dots, Minnie is a favorite.

Aladdin’s Genie:  If you’ve ever wanted to grant wishes, dress like the Genie from Aladdin and carry around your genie lamp!

Jessie:  Become a cowgirl from Toy Story and go as Jessie. Girls will love dressing up, adding braids, and their own twist on Jessie.

As you look for Disney Halloween costumes to wear this year, this list is a great place to begin.

From classic girls and boys costumes to the fun ideas for tweens and teens, you can easily outfit your family with choices from this amazing list.

Trying to coordinate a group costume theme? Click to check out this group Halloween costume finder.