Dress Up in Disney Zombies Costumes!

All activities require adult supervision. This post contains affiliate links. As an Amazon Associate and a participant in other affiliate programs, we earn a commission on qualifying purchases.
282 shares 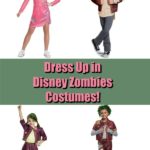 Does your kid LOVE the Disney Channel ZOMBIES movie?

Do they want to dress up like a zombie or werewolf without the scare factor?

Here are a few ideas on how to dress up in Disney Zombies costumes for Halloween or pretend play. You may be able to create your own homemade versions of these costumes as well.

We also have a Disney Zombies DIY Pom Pom craft you can make out of tissue paper!

In the popular 2018 Disney Channel Z-O-M-B-I-E-S movie, the town of Seabrook is divided between Zombies and humans.

The zombies are finally allowed to attend a human high school, though not everyone is happy about it. It takes work by Addison and Zed to help bring their classmates together.

In 2020, Disney Channel’s Z-O-M-B-I-E-S 2 movie came out. It seems as though humans and zombies are living together peacefully until the werewolves come out of the forest in search of their missing moonstone.

Addison wonders if she might be part werewolf, since she has yet to discover why her white hair is so different from other humans. Once again, it takes humans, zombies, and werewolves working together to find a way to coexist.

Dressing up as the Disney Zombies characters is a fun way for kids to walk around as the undead – but without scary makeup.

One of the most popular costumes available is the one for Addison.

Addison is a cheerleader on the human side of Seabrook and one of the main characters in the movie. The Addison costume is the pink cheerleader’s uniform that Addison wears throughout most of the first movie.

Some of them have a purple stripe on the left side of the skirt and green coloring across the shoulders. There’s also a slight slit in the skirt, depending on the costume you get.

You can get it with the Mighty Shrimp mascot picture on the side of the skirt, and the large S on the front of the top. Some also come with pom-poms like the ones in the movie.

Her Zombies 2 cheerleading outfit is a white, pink, and green sleeveless top that says Seabrook, a matching pleated skirt, and a big pink bow.

Once you have the cheerleading outfit and pom poms, just add white shoes to complete Addison’s look!

Addison also has white hair, which she covered up using a blonde wig in Zombies 1. Some costumes come with this white wig to complete the look or you may have to buy it separately.

In Zombies 2, she gets an entirely new look inspired by the werewolves alpha prophecy. Her hair is braided and styled in a new way, she gets a new vest, and she spends less time in her cheerleading outfit after her transformation.

It does not come with the boots and the wig is sold separately. To complete the look, find a pair of black lace up boots.

Where to Buy Addison’s Costume:

Another popular costume is Zed’s. He’s the main zombie character from the movie. You can find Zed’s costume in two different styles.

The first one is Zed’s every day clothing. This costume can come with the torn jacket he wore through most of the first movie, a white undershirt, and a light up Z band. Find a pair of gray pants or dark red pants that match his jacket to complete Zed’s look.

The Z bracelet is what keeps zombies from wanting to eat brains. Some styles of the jacket will have the eyelets and shoelaces through the sleeve near the elbow. The shirt is designed to look worn and ripped in several places.

The other Zombies 1 Zed costume was his football jersey, but it has been discontinued.

Zed gets a new outfit in the Zombies 2 movie. It features a green shirt under an unbuttoned shirt decorated with a Z. His pants look like light colored jeans with holey knees. It also comes with a Z-band.

Where to Buy Zed’s Costume:

One of Zed’s closest friends is Eliza, who eventually becomes Addison’s friend as well. She has curly hair that she wears up, so you can use temporary green hair spray or wear a green wig with the hair pinned up.

Eliza’s Zombies 1 outfit can come with her brown pants and jacket with the patches sewn on. It can also come with the gray undershirt, and a Z band like the zombies wear in the movie. The costume does not come with her shoes.

Like Zed and Addison, Eliza has a new outfit in the second movie. The Eliza Zombies 2 costume has a pink dress with an attached long sleeve pink jacket. Her costume also comes with a foam Z-band.

Where to Buy Eliza’s Costume:

Another great costume – especially for little kids – is the one for Zoey. She is Zed’s little sister and helped Addison and Zed perform a routine during the cheer competition in the first movie. Zoey’s costume can come with a jacket and matching skirt.

The skirt and jacket both may have printed graphics on them that are similar to the ones Zoey had on her outfit in the movie. There may also be an attached undershirt so the jacket can be worn open.

Like Zed’s and Eliza’s costume, Zoey’s can also include the Z band. The outfit may or may not include a working zipper.

Where to Buy Zoey’s Costume:

The Zombies 2 movie introduce a new group of teens to Seabrook – werewolves! Their clothes feature claw marks, fur, and other markings. Each of them wears a moonstone necklace, have white streaks in their hair, and have fangs.

Willa is the leader of the werewolves and is an excellent pick to wear in a Zombies group costume.

She has long black curls with a white streak in her hair. Willa’s costume comes as a jumpsuit featuring a sparkly orange and purple top, blue patterned pants, and a purple vest with a faux gray fur collar.

The pants have claw marks on the side and decorated with little fangs as buttons. It also includes her moonstone necklace, a brown belt, and a bag to strap to her thigh.

Where to Buy Willa’s Costume:

Whether you dress up as a human, zombie, or werewolf from Seabrook, these Disney Zombies costumes are perfect for Halloween or pretend play.

You can purchase their complete costumes or make your own version. Another option is to DIY parts of these costumes and purchase some accessories to help complete the look.

Who is your favorite character from the Disney Channel ZOMBIES movies? 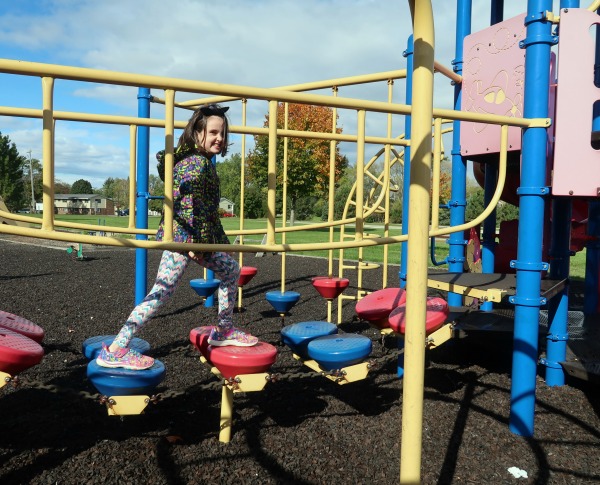