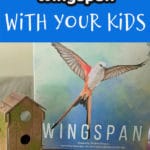 Are you looking for a new board game to play with your family? Take your next family game night to new heights with a fun bird themed game.

Some game themes will surprise you by being a lot more enjoyable than you’d imagine. So, if you don’t consider yourself a bird person, you should still try this game out.

We’ve been wanting to play Wingspan from Stonemaier Games since it was first released and were happy to receive a copy of the game for review.

After one play through, I understood why this game kept selling out. Today I’m sharing reasons why you should play Wingspan with your kids. For a more in depth look at this game, check out our Wingspan board game review.

Wingspan is a tabletop board game for 1-5 players designed by Elizabeth Hargrave, an avid bird watcher, and published by Stonemaier Games. The game plays in about 40-70 minutes, depending on the number of players.

The game states it is for ages 10+, but we have played it with our kids who are 9 and 7 years old. We helped coach them through their turns a lot at the beginning, but they quickly caught on to how the game works.

It takes a bit longer to play than most of the games my kids enjoy, but it was a lot of fun playing together as a family.

I do recommend you play the game with another adult and become familiar with it before teaching the game to your kids.

Here a few reasons why I think it’s perfect for playing with kids.

1. Fun Way To Learn About Birds

It’s a fun way for kids to learn about birds and become more interested in the wide variety of bird species, their habitats, and what they eat. It’s an excellent option to include in gameschooling or a homeschool bird unit study.

In the game, each bird has powers inspired by its behavior in nature. Bird cards also include information about the type of nests they build, food they eat (in general terms), their wingspan, which continents they live in, and an interesting fact about them.

I love that Wingspan is a board game created using scientific information and the bird powers are based on real life behaviors and rather than being a random game action.

Since playing, we’ve been paying closer attention to the birds we see and hear in our backyard. My son also likes to look through the cards on his own.

Playing super competitive games is not always a positive experience for younger players, especially if part of the gameplay involves interfering with another player.

Wingspan is considered an engine building and tableau building game. Players aim to collect a combination of bird powers that can build resources and points more efficiently throughout the game. Each player is focused on building upon their own mat without directly interfering with other players.

There is more than one way to gain points so the path to victory is different every time. In order to win a game of Wingspan, you will need to play bird cards with high point values while also working towards round goals AND your bonus objective.

This helps teach children how to make decisions about which bird cards to play etc. in order to work towards achieving the round goals and meeting their bonus objective. While all players have the same round goals, each player has a different bonus objective.

They also need to be careful not to focus too much on only one thing or they may miss other opportunities for points.

I love finding sneaky ways to have the kids solve math problems. Everyone wants to know their score, right? So they are happy to help add up bird points, round goals, bonus cards, eggs, cached food, and tucked birds. Great way to practice mental math!

When you are spending money on a large game like this, you want to get your money’s worth. This is a game that you will enjoy playing over and over. There are so many bird cards that no one should build the exact same player mat more than once. (We’ve only made a dent in the number of cards we’ve seen during gameplay!)

I’ve played Wingspan with only two players as well as with four, and I’ve played the solo variation. The game was just as fun and challenging regardless of the player count.

Also, there are two different difficulties for scoring the round goals. The blue side is great to begin with because the points are based on how many each player has met. The green side adds a challenge by scoring based on who has the most of each goal.

You’ll get plenty of plays out of the game as is, but there are also expansions available. Change things up by adding in the European Birds game expansion.

Where to Buy Wingspan Board Game

Look for Wingspan at your local board game store (FLGS), order directly from Stonemaier Games, or find it on Amazon.

Did you enjoy doing this activity with your kids or students?