Confession: I Don’t Want My Daughter to be a Teen Slut Like Me

I wish I could pick and choose how my daughter is like me. Right now I know how much she looks and acts like I did as a young child. I’d give her my sense of humor and academic skills, but withhold the busty chest, self-doubt, and low self-esteem. 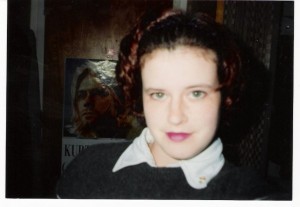 Maybe it’s because my home life was unstable throughout my formative years or that I got fat around third grade or developed breasts in fourth grade, but my self-esteem and self-worth were all over the map. I grew up knowing I was smart. I mostly knew I was loved by my family, but I never felt like I belonged.

I often felt out of place.

I craved acceptance and constant reassurance that people liked me. That I was funny. That I was smart. (I guess you could say there’s still some of that in my place even now.)

There are things about me that I thought very highly of – like my intelligence and creativity. Everything else was a crapshoot on any given day. For the most part I was confident and comfortable with my body, but only after I learned how to use it.

My ticket to being desired

The thing about craving love and acceptance is how it can lead you down the wrong path. Mix low self-esteem with teenage hormones and I was a hot mess. I liked boys, but they didn’t like me… at first.

I’ve struggled with my body image for a long time. It’s still a sore subject for me no matter how I try to cover it up. Being the fat kid is never easy. Add in early boobs that become a new source of insecurity and unwanted attention, then glasses too. I’m thankful I never needed braces.

Well, after losing weight by half starving myself, I started getting compliments. From friends. From family.

I looked good. (Or better, at least. I still didn’t like to sit down in front of anyone in case they saw belly rolls.)

Then I got a boyfriend.

Quickly and repeatedly I confused sex for love. I was never without a “boyfriend” for long. Sometimes I was even seeing more than one at a time. It became almost like a game. Guys would cheat on their girlfriends with me. I’d break up with a guy then turn around and date his best friend.

It was bad… now that I can look back at it. I’m lucky my poor decisions and mistakes didn’t impact my life in a bigger way. Though I feared my sleeping around in my younger years had something to do with our trouble conceiving. Testing showed it hadn’t, but that scared and infuriated me for awhile.

I do not want her to be a slut like me.

It’s funny, because I refused to believe I was one back then. Of course a few choice people would sling that term at me.

And maybe they were, because they certainly didn’t have my best interests in mind. But, I was one. I was surrounded by people but so lonely that I sought the only comfort I knew how to get.

And every time I was convinced they liked me more than they really did. I thought most of them really loved me and if they didn’t, that they at least were my friend.

It’s a hard truth to swallow

I can’t tell you what those guys really thought of me, nor do I want to know now. My parents weren’t bad parents. I grew up in an oddly dysfunctional way, but I don’t know exactly how that factored in. Thankfully I slowed down in college. I matured and entered into meaningful relationships (and eventually met my amazing husband). I regained my self-worth, even if it still fluctuated.

But how do I prevent this from happening to my daughter? How do I teach her that she’s too valuable to be used like that… that love isn’t found between the sheets?

Building her self-esteem starts now… and hopefully she’ll have a stronger sense of self than I did. I suppose I will need to be honest with her about my own experiences. I suppose I could have her read this as well as the love lessons I wrote for her.

I need to teach her to love herself. I believe that I wouldn’t have been so free with my heart and body if I hadn’t struggled with my own self-image and worth.

Knowing what you did as a teenager, do you worry about what your kids might do?

When I think about all the things I went through as a child and teenager (even early adulthood) I am overcome by a HUGE amount of fear of what's to come. That being said, my daughter already has a different life than I did. I can't focus on the things that haven't happened, because for all I know, they might not happen at all. I'll just do the best I can and see where we end up...I am soaking up all this little girl goodness for now.

Being a teen is hard, no matter what you look like, and it scares me to death about my own kids. I think we just have to go against what society is telling our kids and teach them morals and respect and pray they don't do the stupid things we did, or different stupid things, either. lol! Great post, thanks for your honesty.

You are right - we must do the best we can and hope for the best. Even though I did stupid things, I often did them in safer ways than my peers. So.. safe stupid mistakes?

"I still didn’t like to sit down in front of anyone in case they saw belly rolls."

I remember this feeling and still have it on occasion.

Reading this takes me back to the way I felt and acted in college. As Cecile said above, I have often thought "if I only knew then what I know now" but then my life would be different... and I love my life now!

Sometimes I get really self conscious about the rolls still but no where near as bad.

You know, I don't have many regrets even if I wouldn't do a lot of things again if given a do over. They did shape me and will help me teach my kids a few things. We have to pull out those positives, right?

I always think it would be great to go back and time with the knowledge I have now and correct all the mistakes I made. But, then I realize that things probably wouldn't turn out the same and I might not have my three wonderful children! It is great that you have learned from your mistakes and are willing to help your daughter. So many parents today can't say that.

I know this took a lot for you to write. You've already given her the first steps to making sure her future is different than yours. She has you... her amazing mom to guide her.