Why Must Everything Happen While I’m on the Toilet?

It’s one thing to have no privacy anymore while trying to go to the bathroom, but it also seems to be my daughter’s prime time for getting into mischief. I can’t tell you how many times I’ve had mini heart attacks while doing my business.

The first thing is just my daughter’s grabby hands. She is after everything in the bathroom and I feel like an octopus as I try to keep her out of things. I used to think those toilet lid locks were dumb until I started brushing my teeth with a foot propped on the lid to keep her out of it.

Then there’s my daughter’s fascination with the bathtub. She’s no longer afraid of it and likes to throw everything we own into it despite my desperate pleas to stop. Once everything is inside, she wants to pull it all back out again. Problem is, she doesn’t know how to keep her bottom half weighted down as she strains and reaches. Thankfully our bathroom is small so I can grab her legs while sitting on the toilet, preventing her from tipping over and bashing her head.

Other times, she just doesn’t understand that I need my space and proceeds to climb me while I’m on the pot. Few things are as aggravating as trying to go while being used as a jungle gym.

One of the worst and possible scariest things happened just this morning though. I was actually able to use the bathroom without an audience. The door was open though so I could keep an ear out for Rissa. She would pop into the doorway periodically.

She decided to occupy herself with splashing her hands in the cat’s water dish. While annoying for the cats, I try not to get too mad at her for it. I don’t want her confused about playing in her water table or the bathtub. Besides, it’s the only way I get a few moments of peace each day.

Well, things were okay until I heard a splash then “what’d I do?” come from my daughter. I heard her little feet running and splashing then I heard the slip and bump…. then nothing.

Hearing nothing when you know your child just fell is scary. Way scarier than crying.

I called for her, “RissaBoo? Are you okay?”

My heart jumps into my throat.

Then I hear her whine, but she sounds more frustrated than hurt. I try to finish my business and get cleaned up as fast as possible. I look out the doorway to the left and see her laying in a puddle of water laying on her back.

She looks up and fusses. Her discomfort fuss. Of course, because she soaking wet. I pick her up and check her over. She’s wet but ok. She tells me “ow” and points to the floor. I knew she didn’t hit her head because the bang I heard wasn’t loud enough.

Maybe I’d rather not go alone? 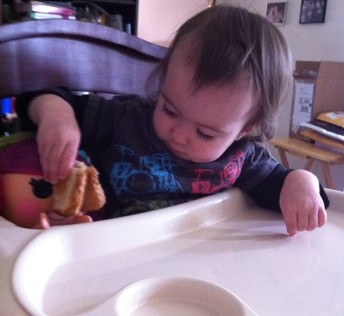 It truly is when everything happens. I feel for you and remember those days so well.

Ever had an earthquake happen while your sitting there? I have!

Oh gosh, I felt like I was reading my bathroom adventures! Especially the part about her bottom half falling in the bathtub with her. It makes my heart drop every time. Ohhh to do your business in peace..one day!!!