Our beginning stash started with only a few new cloth diapers and a whole stash of Motherease used cloth diapers. I read that getting used diapers was a very economical way to start. At first that idea seemed gross to me, but then I figured it’s not much different than getting someone else’s clothes (though I wouldn’t buy used underwear…). I put a “wanted” request out on our local Freecycle community asking for fluff in good used condition to try out.

I received a rude response telling me that no one is just going to give their diapers away for free. Well, I was asking for one or whatever and asking it of people that don’t need them anymore. Besides, who cares? Why get up in arms about me asking? Does she email the people asking for free cars and PS3s?

After awhile I did get a response. A lady had diapered five children and no longer needed the box of fluff in her basement. I agreed to take it! While the pieces weren’t in new condition, it did get us into cloth full-time quicker. I was grateful, but happy to slowly collect and purchase my own that worked better for my daughter’s body type (and were much cuter!). I donated the best of those Freecycle dipes to other women in need in my area.

During that time, I also checked Craigslist, eBay, and various forums and boards. Personally, I thought most people were asking too much. That was my biggest turn off. Then I was nervous about so many using Tide or said there were stains or they just weren’t… cute. I decided that I could justify a couple extra dollars to buy new. I still watched for deals for awhile.

Here are my pros and cons of getting used diapers:

Have you bought used cloth diapers? Why or why not?

Don’t forget to see what April and Mariah think about this topic! 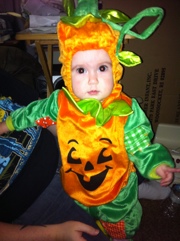 I'm just getting started with cloth diapering my ten month-old daughter, and I really wish I had done so sooner. It really is pretty easy, and the thought of all the trash I was producing with disposables is pretty disturbing. The positives far outweigh the negatives in my opinion.

Oh, and no, I have never purchased used...I like reusing/recycling, but I would imagine I might need new diapers if I expect them to hold up for multiple children.

Yeah my first few diapers were used and I was lucky to find them still in good shape and haven't had any problems with them. Here lately though I got one from a swap and it was just gross... granted I didn't buy it, someone just sent it to me since I can do repairs. So I put in new elastic, snaps, stripped it, washed it, sunned it, washed again, dried on hot for 20 minutes and it's good to go again. But I don't think I'll buy anymore used diapers, even though the first ones were good.

I don't mind buying used as long as they don't have stains!

most of my stash is used cloth diapers. Like you, it was a quick way for me to get enough diapers all at once. There have been a few that didn't work out - but for the price I paid it was worth it.

I too am turned off by the prices people ask for their used dipes on craigslist. But I do have some used dipes that are hand-me-downs from my cousin and we love em. She saved us a ton of money when our little one was a newborn by sharing her stash.