Skip to Content
All activities require adult supervision. This post contains affiliate links. As an Amazon Associate and a participant in other affiliate programs, we earn a commission on qualifying purchases.
0 shares

This week I started my nonstress tests (NSTs). I’ll be having them twice a week until baby boy gets here. It’s part of being considered a high risk pregnancy. NSTs are a mixed bag though. 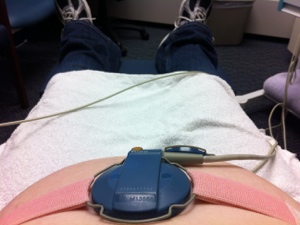 All strapped in and ready to go!

When I was pregnant with Rissa, the first couple NSTs were nice. Once you get over the scratchy belts and enjoy chilling in a recliner for 30-45 minutes, it turned into naptime for me. It was sweet! Best way to get naps in during the workday!

Unfortunately, after the first couple appointments things weren’t quite so relaxing. A few times Rissa had hiccups which were amplified by the monitor. It was loud! It’s kind of nice hearing baby’s heartbeat the whole time though.

My last OB showed me the readouts and I could see the heart rate on the monitor. I can’t remember how much of an increase they wanted to see but within 30 minutes they need to see the heart rate increase so much at least twice. Unfortunately, if baby is sleepy they don’t move much…and their heart beat stays steady.

The first time Rissa didn’t “perform” I had to stay on the monitor for an extra 30 minutes. My OB said the peaks weren’t high enough to pass…

So I then needed to stay for an ultrasound called a biophysical profile (BPP). She said they needed to check on her to make sure she was okay.

I began to worry that everything wasn’t okay. Then we had a new test to pass. During a BPP the tech needs to see baby practice breathing, a variety of movements and measure fluid. They need to see everything on their checklist within 30 minutes.

She didn’t meet the whole checklist so I had to have another BPP the next morning. Talk about stressful. I was assured that Riss was “probably fine, but…” yeah so that made me nervous!

After another “failed” NST (but a passing BPP, phew) I was switched to twice weekly BPPs.

So the other day for baby boy, I had to be on the monitor an extra 15-20 minutes. The nurse had to seriously shake up my belly then they got better readings. I’m already wondering when all these NSTs I have scheduled between now and my due date might get changed to BPPs…

Hopefully I won’t get as nervous and worried if baby boy’s readings aren’t “passing.” Did you have to go through extra monitoring in your pregnancy?

Our first was stillborn due to placental abruption at 35 weeks (I had Pre-E and undiagnosed HELLP - and have had some kidney issues since). So I've been considered high risk and my subsequent pregnancies have been very closely monitored. So thankful for that, but they also brought on even more anxiety and fear!

I'm sorry to hear about your loss *hugs* extra monitoring can be good but yes, definitely adds more anxiety at the same time.

I also had to do NSTs my son had two small wholesinhis heart ( it's all cleared up now). But I hated at 37 weeks I was having Braxton hicks and they gave me a shot to stop labor.... Well he ended up being a week late (I think due to the shot). I hope you have a safe rest of your pregnancy.

Oh my! I'm glad he's fine now but that must have been worrisome. I'm surprised about the shot at 37 wks since that's still term, but they must have thought he needed more time or didn't they realize it wasn't real labor?

Do they make you push a button every time you feel her move? When I had my daughter (#1) they did the whole fancy belt thing, but I had a little clicker/button thing that when I felt her move, I had to click it. If she didn't move enough or have good readings, I ended up hooked up longer and 99% of the time, I ended up at the hospital in labor and delivery hooked up to another machine to do the NST and to do an ultrasound to ensure blood flow was good. No joke. She was due December 27th and they started my NSTs at the beginning or mid of November. I did this (NST at the office + additional time at the office + NST at the hospital + US at the hospital) twice week for 1 1/2-2 months! I hated it. I cried all the time. (And I had hubby with me each time). It was pure torture. I was happy when I didn't have to do them with my son (#2) because I went with a midwife, but with #3, I can only imagine I will be doing it all over again so I am right there with you on the stress factor! Hugs!

For my daughter they didn't have me track her movements but they also measured for contractions. This time I was asked to press a button for every movement I felt...I think that may have made a difference with the readings...like they didn't just focus on the peaks being X amount of an increase. Made it hard to nap or read though!

When I say "her" I meant Rissa, but "him" would work too!