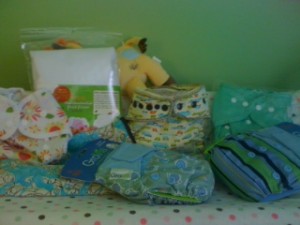 We’ve been using cloth diapers full-time for a little over a month now. During that time I used one (maybe two) disposable diaper while we were away from the house. That was in the first few weeks and I didn’t have enough cloth diapers along in our diaper bag. I wasn’t prepared and just grabbed a couple to take with. The next time we were over there for over half the day, I packed plenty of cloth.

Unfortunately, I had to improvise with storing them to launder since I didn’t have a travel wet/dry bag. Now I do, but haven’t gotten to put it to the test yet!

Cuteness Factor – Seriously, there are some ridiculously adorable prints and colors out there! When we go out of the house, I like to coordinate her diapers with her outfit!

Saving Money – You can build a stash of diapers for a reasonable start up cost (less than $300) if you are savvy with sales, buying gently used, receiving free, and/or winning diapers. Some styles and more expensive than others, so it depends on what types you go with. If you use your diapers for more than one child, you will definitely save money – a lot of money. Disposables can easily cost you a couple thousand dollars per child between birth and potty independence.

Environmentally Friendly – We have less trash that goes out to the curb each week. In fact, switching to cloth cut our trash output in half.

Healthy – Rissa never had bad diaper rash, but she almost always had mild diaper rash while in disposables. She still will have some rashing here and there, but it’s infrequent and clears up quicker. I like knowing that she has soft fabric against her skin rather than who-knows-what chemicals made to hold a ton of pee.

Laundry – Yes, I’m serious! I look forward to washing her diapers so we can use the cutest ones again and again! I get bummed when we get to our “just functional” part of the stash.

Less Leaks and Blowouts – With disposables, we constantly had blowouts when Rissa pooed. This led to more clothing changes, laundry, and stain fighting! Since switching to cloth we’ve had zero blowouts. We’ve had a couple leaks and some wicking, but these issues have significantly decreased for us.

Reasons People Ask Me If I’m Crazy to Use Cloth

Laundry – Everyone focuses on the ick factor of laundering diapers and how it increases the laundry that needs to be done. The ick isn’t really any worse than when you change a disposable. Your hands get just as icky with either one during the changing process. I don’t touch them again when I launder them if I’m paying attention… I just take the liner down and dump the diapers into the wash machine and toss the liner in too.

As for extra loads… I don’t really notice. Before baby, I did laundry once a week. When baby came, I did laundry every couple days. Using cloth, I wash them every 2-3 days, so really it seems about the same to me. Laundry has become a seemingly never ending task since I gave birth so a couple extra loads a week is insignificant.

Usability – I use modern cloth diapers. Gone are the days of pins and flats and rubber pants. You can still use flats, but they’ve worked on improving the absorption power. You can use pins if you want or you can use a snappi, which is a plastic thing with little grippers for the cloth. It won’t hurt baby! Instead of rubber pants, there are water proof covers that are easy to use, they have a variety of colors, and they have better airflow. For the most part, today’s cloth doesn’t look anything like the old school cloth diapers. Also, there are a variety of styles!

Cost – No, the extra water, electricity, and detergent are not increasing those bills by that much. It still comes out cheaper than what our monthly disposable diaper budget was, even if some costs appear merely rearranged. I will warn you though, buying new cloth diapers can be addicting and that’s where you have to watch the costs!

I can honestly say I’m loving cloth. I never would have thought I would be cloth diapering or an advocate for using cloth, but I really am glad I made the switch. A few friends and family have been asking me lots of questions and are interested in trying it out, which is awesome! I kinda just took the plunge, armed really only with knowledge I gained from online resources. But, I think it makes it easier to be curious and try it when you actually KNOW someone who’s doing it and SEE it. Plus, they know they can ask me questions or even borrow a few to try out. I’m no expert, but I have hands on experience now!

Oddly enough, I kinda forget that we ever used disposable diapers. We used them for almost the first three months of Rissa’s life (more like 2.5, I guess), but now she’s been in cloth for a little over a month and will remain in cloth until she potty learns/trains.

I’ll keep checking in and giving updates on how we’re doing. I’ll also be reviewing the cloth diapers we use as well as our wash routine!

Feel free to ask questions or share your experiences in the comments!

0 shares
Stressful Stroll aka How Many Limbs are Needed to Open a Stroller?
← Read Last Post
Breastfeeding Milestones
Read Next Post →
Click here to cancel reply.

Yay! I am so glad you are using cloth. I love it! I just wrote a post about laundry and cloth and I should have added the fact that people always say it's gross when talking about poo-I totally left that out. I guess that's another topic for me in the future. BTW-I found you on mommyblogs.com:)

I second the coconut oil.

Cloth nappies are great! A lot of people don't realise just how easy they are these days. It's just a matter of giving them a go.

Thanks ladies! I will need to get some coconut oil - maybe for a review? :) I do have a couple sposies left but gave away most of what I had left over.