Stressful Stroll aka How Many Limbs are Needed to Open a Stroller?

Last Thursday got to 50 degrees, which is pretty nice for February in Wisconsin. I was supposed to have a mommy date at the park that afternoon since we both have spring fever. Unfortunately her daughter was coming down with a cold, so we had to cancel. Despite this, I was still determined to get out of the house – at least for a walk!

Well, it was warmer than our Sunday stroll according to the thermometer, but it felt chillier.. it was damp and hazy rather than sunny. My first thought was good thing we didn’t go to the park today after all. I briefly considered not taking our walk since it was kinda crummy out, but I couldn’t back down now.

We were going to spend some time outside!

So I manhandled the stroller through the doorway with one hand and carried Rissa in the other. Time to open it up!

Stupid thing wouldn’t open. It’s supposed to be a one hand open/close stroller. I’ve done it before so what was the problem?

Have you ever seen a woman struggling to open a stroller while hanging onto a bundled up baby? I musta looked ridiculous! I felt like a dog chasing its tail or like I was trying to bite my ear..no matter how hard I tried it was impossible.

At this time we were already outside and I was bound and determined to take this damned walk. After a good five minutes of struggling, I laid the puffy blanket I brought along down on the porch and laid Rissa on it.

Using two hands and a foot (and some choice curse words *ahem*), I got the stupid thing to open. That’s when I see the reminder “recline seat before folding” printed in large letters in the bottom basket.

I, uh, forgot to do that last time. Lesson learned, right?

Next, I get her buckled in and grab the blanket to cover her legs.

It’s wet and dirty from melting snow. I fold the wet, ucky half in and then cover her legs.

Thankfully, she’s all smiles. I stop to take pictures of her with my phone. 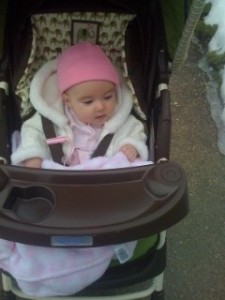 Of course, she stopped smiling by the time I got my phone out. 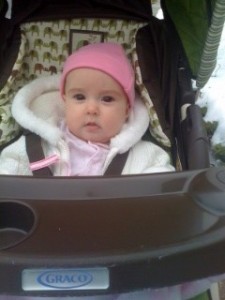 Then I notice how badly her tray is scuffed from our wrestling match in the driveway… its only the 2nd time I’ve actually used the damned thing and it looks beat to hell already! 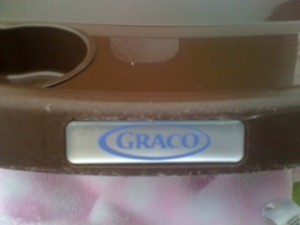 No matter. We are going for a walk!

So off we go. It’s decent enough despite the cool wind. Rissa happily looks around and drools the entire time. We were gone for probably about 15-20 minutes.

When we get home, I remember to recline the seat before taking her out – easier than trying to do it while holding her. I know… smart thinkin’, right?

I lift her out and fold it down with one hand. Woohoo triumphant! Then I try to get us in the house. It’s awkward, can’t open door far enough because we’re all in the way. I move the stroller back behind us and open the door.

Our screen door needs to be fixed. It doesn’t shut on its own anymore, it just hangs open. So the screen door swings all the way open and rests against the side of the house. There’s a big fat orange cat on the other side of the inside door.

I try to barge in with the stroller and baby. Usually the cats (we have three) just back up or sniff curiously at the doorway.

No such luck today. Flabby tabby decides to just keep on walkin’. 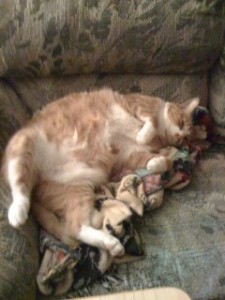 As you can see, he’s not a small kitty!

I let go of the stroller and have a moment of panic. I can’t grab him with only one arm free and I can’t just pitch Rissa. I try to swipe at the treats on the dishwasher but can’t reach them. He’s getting out of my sight through the doorway and another cat is getting curious. Quickly, I set Riss down on the kitchen floor and dart outside, making sure to close the door behind me.

Thankfully this cat isn’t too interested in running unless one of the other cats is chasing him (kinda like my own running philosophy). I call for him and he just meows, meandering down the driveway and behind my car, rubbing against it like an old friend. I was able to scoop up all 16lbs of him and lugged him back in the house…

…where there’s a baby crying.

Maybe we shoulda just stayed in the house!

She looks so cute all bundled up! I lived in Utah for a while, so I do have memories of 50 feeling like a nice winter day...Houston has spoiled me, though! I don't go outside now (even in the winter) when it's that "cold." I know that it will be warm again (65-70) soon!

Stroller battles are the worst! I have a hard time one-handed even when it is all folded up right. I just plan on using two hands...or at least a hand and a foot!

Thanks for linking up--I can't wait to get to know you better!

Thanks for the return visit, Deanna :)

I don't have the adapter strap to put the car seat on top, but we figured the stroller would see little use until spring. She's definitelt getting too heavy to keep carrying the car seat though!

I have a 2 year old and we haven't been out with the stroller yet (she prefers to walk... she is my independent one). My 8 year old would still ride in the stroller if I let her! I remember when I got the stroller/car seat combination. I had the stroller in the car and the first time I went to use it, I could not get it open for anything. I ended up carrying her in her carseat in to where I had to go. I had to ask my husband when we got home how to open the stroller!

Ahh, I hate days like that when everything seems to go wrong! ... just stopping by to thank you for visiting my blog!