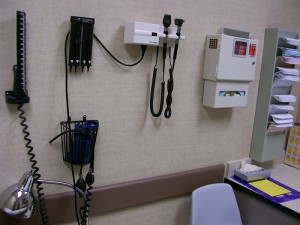 Last week we had Rissa’s six month check up. Once again, the doctor said she is growing steadily and doing well. She’s still TALL for her age and SKINNY. Seriously, how is this possible?

If she didn’t look so much like me, I’d wonder who’s child she really was!

She measured in at 14lbs 7oz, 26 inches long. Her weight dropped down into the 25th percentile but her height went UP in the 90th percentile.

Her clothes are…. oh gawd she BARELY wore her 3-6 month clothes. Most are too small now!

The doctor said she’s growing at a steady rate though, so not to worry. I had someone ask if she was 9 months old, I think just because she’s like half my height already! She is now sitting unsupported! She just can’t get UP into a sitting position on her own yet.

She’s not crawling (SOOoooo close) but she’s creepin’. Mostly backwards, but she can pivot around and somehow moves sideways too. She does this thing where she pushes up on her arms and rocks side to side…. then front to back. She’s like an inch worm. Once she figures out how to get on her knees….LOOK OUT!

She’s still very vocal. Her laughter is evolving into shrieks and squeals. She’s finding more things funny, even if Brian and I look more and more like goofs. I think I gave myself slight brain damage from repeatedly shaking my head around because it made her laugh. I kept doing it and doing it… until I had a headache.. then did it again!

It doesn’t sound much like words yet. But she is definitely experimenting with sounds. She also likes to stand now and bounce! She loves her exersaucer and going “bouncy bouncy bouncy!”  When she is sitting on the floor or on our lap, she tries to bounce. It’s cute, but makes her fall over often. She is learning to catch herself though!

Wow, she is growing up SO fast already. Six months old. I can barely believe it.

(Sidenote: I apologize for not being as responsive to comments lately, but I think you know it’s been busy on my end of the keyboard around here, right?)

At her 2 month check up she was 10lbs 8oz, 23in. Average for weight, above average for height.

At 4 month check up she was 12lbs 5oz, 25 in. Above average for height, below average for weight.

oh!dont worry my son was too tall when he as born. He wore 4-6months old cloths soon after his birth. Now he is 4ys old and he looks like he is 9yrs

I just wish the sizes weren't so... odd. I've been surprised that she's been in the sizes pretty true to age for this long!