The Quest for the Perfect Newborn Outfit

All activities require adult supervision. This post contains affiliate links. As an Amazon Associate and a participant in other affiliate programs, we earn a commission on qualifying purchases.
12 shares

I think you all know that I can’t keep baby’s sex a secret until birth. I just can’t do it. I like to know as soon as possible and get a little bonkers when the ultrasound techs aren’t quite sure. Still, I proceeded with some caution during my first pregnancy when it came to buying baby clothes. Well, I started buying before we knew Rissa was a girl because I was just SO excited about being pregnant that I couldn’t WAIT to shop for baby stuff.

So, I started out buying gender neutral items – greens and yellows featuring giraffes, ducks, frogs, and monkeys. (Though some people tried to tell me the frogs were boyish. Pfft.)  While that was fun, I didn’t want ALL greens and yellows. I still wanted blues and browns regardless of baby being a boy or a girl, but definitely purples and pinks if it was.

And honestly? The clothing I received from baby shower guests were more fun when they knew what I was having. But, if that was a secret, I know we would have received more neutral items.

As I started nesting more near the end of my pregnancy with Rissa, I worked on washing all her little newborn clothes and blankets in preparation of her arrival. After cutting off all the tags, I had a moment of panic. What if all my ultrasounds were wrong? What if she was really a HE?  All the pink clothing surrounding me scared me.

This child will be naked if its a boy!

Okay, so that wasn’t true since I did buy several neutral outfits. In fact, I still picked a neutral outfit for coming home even though we were 99% sure it was a girl. I just wanted to be prepared! In some ways I started to think being Team Green was less stressful – they didn’t have to worry about being wrong only surprised!

Well, Rissa was born as a girl as we expected and now I’m expecting a baby boy. For a little while there we weren’t too certain, but follow up ultrasounds have made it quite clear. Still, not everyone is lucky enough to have numerous ultrasounds like we get due to being considered high risk.

So, now that I only have 9 weeks left to my due date for #2, I’ve been going through Rissa’s outgrown clothes. I finally feel confident that we can get rid of all the girl stuff to make room for boy stuff. We’ve bought a few “boy” outfits now and I’m keeping all the gender neutral clothes, but I haven’t decided on his coming home outfit yet.

If I didn’t know if he was a he or a she, I would most certainly choose this…. 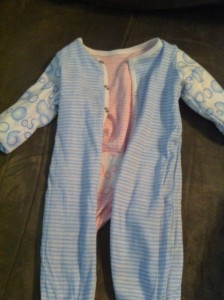 A pink to blue reversible outfit by TwoTara, named after a chameleon like lizard that changes colors over time. All of their baby clothing comes two sided so you just have to flip the garment inside out to show blue or pink! A seriously awesome baby shower gift idea, particularly for anyone keeping baby’s sex a surprise. It’s neutral yet not at the same time, but allows you to have ONE outfit that is perfectly suitable for BOTH boys and girls. (And a keeper for the next baby!)  You know, this would be great for hospitals to use when they dress baby after their first bath!

I love how the snaps and everything work perfectly find no matter which way I turn the garment. It’s adorable! And it is totally in the running for baby boy’s coming home outfit!

Do you think more newborn clothing should have reversible colors like this?

Disclosure: We received an outfit to review; no other compensation was provided. 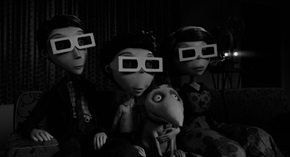 I love this outfit! I can't wait to find out what we are having! We are hoping for a girl!! Even though we always find out what we are having as soon as we are able to determine it through ultrasound I always can't wait till I find out to start shopping for baby since it is a very excited time for a mommy, I always find myself buying neutral clothing the months into pregnancy!

It's sooo hard to resist buying new clothes for a new baby - at least for me! So I definitely relate :) Congrats on your pregnancy and let me know when you find out!

We only had one ultrasound where the sex was visible so I've been nervous this whole time wondering if it's really a boy, or if we're going to get surprised with a cute little princess in the delivery room. She won't mind coming home in the "Mommy's little man" outfit I already picked out, right? ;-)

I think it's always a bit nerve wracking... you never REALLY know until they come out! I'm lucky with all my extra ultrasounds in this way but I still get that "what if.." creeping up on me. LOL I think she'd rather come home in that than a boy in a pink princess outfit ;)

Haha, I'm the same way - I don't think I could EVER have the sex of a baby be a surprise. And I know what you mean about wanting to buy baby things before you even know what it's going to be - it's just so fun!

Being in "Team Green" for all three of my babies, I would have loved to have an outfit like that handy!