Misconceptions About the TIME to Stop Breastfeeding

All activities require adult supervision. This post contains affiliate links. As an Amazon Associate and a participant in other affiliate programs, we earn a commission on qualifying purchases.
10 shares

Moms (and non-parents) are up in arms about a recent TIME magazine cover and article. While I have not read the article, I’ve seen the cover. It achieved what TIME wanted (I presume) which was to shock and cause controversy. 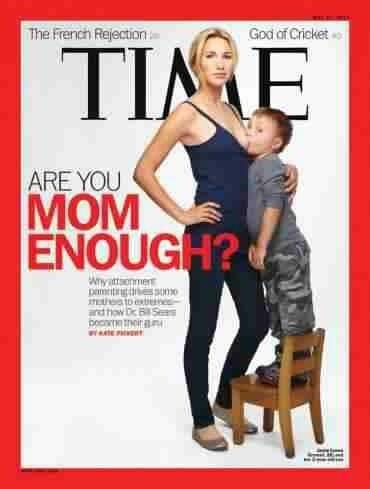 Yes, thanks, TIME for driving a bigger wedge among moms and those of us who would like to NORMALIZE breastfeeding in our society and NORMALIZE natural (attachment) parenting. Things that are normal and natural yet are not treated as such. Instead it’s being sensationalized as extreme and weird.

Now, admittedly I do not like the cover. I think it further pushes the agenda of those against extended breastfeeding rather than helping to reduce shame and scorn of mothers who nurse their toddlers. What bothers me even more is the most ridiculous responses I’ve heard and read from people commenting on this cover with their ideas about when to stop breastfeeding. Mostly these come from people without kids or people who have never breastfed … People who already judge and shame Mothers more than they should, if you ask me.

I am an attachment parent. I still nurse my 18 month old. I am not extreme nor inappropriate. In fact, I thought what I’m doing now WAS weird before I had my daughter.

Anyway, here are some misconceptions about when to stop breastfeeding:

It’s weird to breastfeed after they are a year old.

It is not weird, it’s recommended. The World Health Organization recommends nursing a child until at least the age of two. They are still very much babies.

it’s time to stop when a kid can walk and talk. If they can ask for it, they shouldn’t be breastfed.

Really? My daughter could sign for milk before she was a year old. I was ecstatic that she could clearly tell me what she wanted. It made things less frustrating because we could communicate and meet her needs adequately. When babies learn to communicate, they start by communicating needs. Breastfeeding is a need.

Babies don’t all learn how to walk and talk at the same time so this is a very poor way to determine what nutrition she needs and when to alter it.

They should be eating an adult diet when they are a year old.

This is just dumb. They aren’t adults, so no, they don’t require the same diet. They are still growing and breastmilk is great brain food. Just because I still nurse her at 18 months does not mean she doesn’t eat solids. She does eat meals and snacks, but she nurses too. It’s not even as often as before, so it’s not a big deal.

Breastmilk is more than about nutrition. It also is bonding, nurturing, and helps with their emotional well being. It provides antibodies and helps their immune system. In 18 months my daughter has had only one cold and one stomach bug. She’s been around sick and germy kids too. And when she was sick, my breastmilk gave her what she needed to keep her hydrated and nourished since she didn’t want to eat while having diarrhea.

If you must continue giving breastmilk, you should pump.

How absurd to tell someone to work harder rather than smarter. If you want to keep drinking cow’s milk, then you better go milk it yourself!

I like nursing because I don’t have to deal with bottles. If I pumped it takes more work and time to extract what I need. My daughter is more efficient than any pump on the market. (It’s like being intimate…fake plastic can do an ok job but it’s not the same as the skin contact with your partner.). Then there would be pump parts to wash, milk to store, bottles to wash, milk to heat up… no thanks. From the tap is better and easier.

I could go on, but I’ll stop there…

Bottom line, if it’s not your kid maybe you shouldn’t worry so much about what someone else chooses to do (unless it is putting the child in immediate and eminent danger). Everyone does not parent the same way and there’s no such thing as the right way to parent nor do perfect parents exist. We are all just trying to do the best job we can. Judging each other isn’t helping especially since we all have something to be judged on.

I hate how there's been so much time and energy being spent trying to one-up other moms, when really we should be trying to support moms, no matter what choices they choose to make. There's so much mommy drama going on, so much negativity when really all moms are trying to achieve the same thing.

Indeed - we just want what's best for our kids. Some of us take different paths to get there is all.

I personally feel sick and tired of "grown?" women attacking and criticizing each other like feral cats. Really, I could care less if she breastfeeds this child until he starts college. Not my life. As for the behavior I have seen in response to this article, I just have to say I am glad my kids are grown. SHAME on this generation for fighting against each other instead of trying to be helpful and supportive.

Thank you Darcy for this article. I am annoyed by this cover too. If that mom wants to extend her breast feeding, then let her. I don't judge her or any other mother for their breastfeeding or non-breastfeeding choices. I breast fed my daughter until she was two, and I am glad I did. We need to all support each other. It is hard enough being a mom as it is.

I agree with you completely. Breastfeeding is natural and has to be decided by the parent. This cover was obviously trying to be controversial and it succeeded

Do you remember hearing about a mother a few years back that saved her children by breastfeeding them. I don't remember where it happened; but she and her two children (one was an infant and the other was at least three) got in a car accident and were trapped in their location. If she hadn't breastfed both of them, they would have starved to death.

I used to think extended breastfeeding was crazy, but then I had kids. I had no breastfeeding support, so I didn't do it for long. But if I hadn't stopped, I may still be nursing my 4YO; I think it might help her calm down some at night.