Skip to Content
All activities require adult supervision. This post contains affiliate links. As an Amazon Associate and a participant in other affiliate programs, we earn a commission on qualifying purchases.
5 shares

For Rissa’s birthday, we received the Little Tikes Lean to Turn Scooter as part of being a Little Tikes Ambassador. 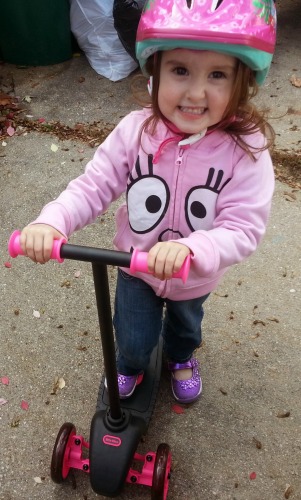 I can’t quite remember when Rissa started asking for a scooter, but it was several months ago. She likes her Little Tikes 3-in-1 tricycle (that we purchased at the beginning of summer) well enough, but scooters, man. That’s where it’s at. She’s been eyeing them up at the store and asking for a helmet.

I must say I’m mighty proud of her safety awareness on that one.

When we told her she could pick out a helmet she was very excited. Way more excited than I ever remember being about a helmet. Then again, helmets weren’t as common when my dad made me wear one while riding my bike. They didn’t have cool kid ones so I drew on mine to give it character. That didn’t lessen any of the teasing associated with wearing it in the first place. Anyway, Rissa picked out a pretty Dora the Explorer helmet and bell combo. She’s driving me bonkers with the bell, but she likes the helmet. 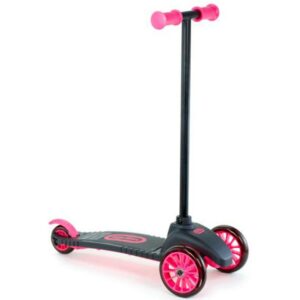 We knew the scooter would be arriving around her birthday and saved it to be opened last at her party. That girl couldn’t talk Daddy into putting it together fast enough so she could take it for a spin. I think she was extra excited after watching a new Dora DVD we received to review from Nickelodeon – Dora the Explorer: Dora’s Ice Skating Spectacular! – there was an episode where she’s riding her scooter. Rissa said she wanted to be just like Dora.

I felt comfortable letting her go out and ride it. The Little Tikes Lean to Turn Scooter is perfect for toddler’s because it has a wider base and three wheels for stability. The handle bar is the right height for her too. When she first expressed interest in a scooter I wasn’t sure if we’d find an age appropriate one. I was very happy to see Little Tikes did! Rissa knew what to do right away, but she’s still figuring out how to turn. She naturally wants to turn the handle bar, but this scooter turns when you lean left or right. That’s the only thing tripping her up right now, but I am kind of glad it takes more work to turn.

Our house is too small to ride it indoors, though she keeps trying. Thankfully she had a few nice days to play outside before we had our first snow and cold November rain. She’s not very happy about waiting until next spring to ride it, which is why I’ll randomly find it in the bathroom or she’ll eat lunch while wearing her helmet.

So, if you are on the sidewalk and you see her coming… you might want to move over… for safety.

That face! I would certainly get off the road! We love that scooter!

She's so determined and wants to just zoomzoomzoom!