Woohoo! Today (June 24th) Cars 2 races into theaters nationwide. And let me tell ya – I saw it. I think you’ll want to see it to, but there are a few things you may want to take into consideration before you buy those tickets.

When star racecar Lightning McQueen (voice of Owen Wilson) and the incomparable tow truck Mater (voice of Larry the Cable Guy) head overseas to compete in the first-ever World Grand Prix, Mater gets caught up in an intriguing adventure of his own: international espionage!

I was fortunate to receive the opportunity to attend a special screening of Cars 2 in 3D in my area earlier this week. There was even a local celebrity! David Hobbs of David Hobbs Honda attended this special Wisconsin screening. Why? Because he was the voice actor of David Hobbscap (one of the race announcers) in the movie! And you know how good Pixar is at those little details? Well, he’s portrayed as the same car he used to race!

Let me back up a bit…

I really wanted to take my nephews and sister-in-law, but it was a bit too late at night for them with the 45 minute drive. So, hubby and two of our friends came along. The whole experience was awesome. It was my first screening. I admit – I liked feeling like a VIP… skipping the line, being on “the list,” sitting in reserved seating…

There were quite a few kids there, as I expected. The Radio Disney Crew did a good job of keeping them occupied with games, trivia, and prizes until the movie was ready to start.

The previews were awesome. We’ve never watched animation in 3D before, only real life with CGI elements. I was impressed with the clips for Brave and The Lion King. Just, wow, amazing. Such depth and realism. And, of course, a Disney-Pixar movie can’t start without a short! 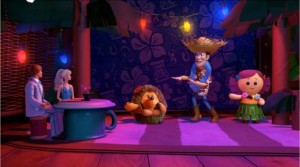 The Toy Story short was hilarious and entertaining per usual. {I’m really trying not to give any spoilers!}

Next up.. Cars 2 … in 3D. We loved the first movie. Brian was a bit skeptical about how good the sequel could be, especially with the spy story angle. Our friends talked about the promo about drifting in Tokyo (which wasn’t in it).

Well, the movie was good! I liked that there was a lot of the same cast, but this one focused more on Mater. There were still racing elements to keep it in line with the first one, but it was different enough to be separate. You don’t have to watch the first one to understand and enjoy the second one. Some of the running jokes are funnier when you remember them from the first, but still funny nonetheless! There are some pop culture references too, which are definitely enjoyed by adults.

The 3D was incredible as was the “Carification.”  They certainly worked hard on this to make it look right. 3D really adds to scenes where the view comes in and down from the sky. Seeing dirt and rocks jumping and flying also helps immerse you in the scene. Some scenes had a slightly odd look to them, but I think that was the projector set up. Also, if I had to look to the bottom to read writing it kind of messed with my eyes. The buildings and scenery, especially in Italy, was stunning. At times, I almost forgot it was an animated film. Our friends appreciated minute details in the presentation of the cars, such as one door being a bit wider than the other on the Pacers.

The spy storyline was fun. I wasn’t sure about it, but the accidental field agent bit was fitting for Mater. I was surprised at the amount of violence in the movie considering it is for children. I realize it’s hard to have a spy movie without guns and explosions…but I was still surprised. I probably wouldn’t have thought twice about it prior to having my own child, but I pick up on this type of stuff more often now. My surprise wasn’t just anout the violence of guns, missiles, and explosions, but also how much the characters talked about killing other cars and being dead. I know they aren’t actual people, but they are representative of living things. And kids like to quote these movies… It had a lot of intentional hurting of each other and plotting to kill cars. So, if you are very against exposing your child to guns, threats of death, etc, you may want to sit this one out.

On the other hand, there are positive take away messages such as the importance of friendship and accepting and valuing others for who they are (and not trying to change them). Oh and teamwork is present throughout as well. Definitely reinforcing messages from the first one!

Yes – totally worth seeing in the theater, especially in 3D!

Are you going to see Cars 2?

** FTC Disclosure: I received the product(s) mentioned above free of charge by the company or PR representative in order to conduct an honest review. I was not compensated in any other way for this post. The thoughts, experiences, and opinions included are entirely my own and may differ from that of others. I am not liable for any issues you may incur from use of said product(s). Images used are owned by me or provided with the company’s permission unless otherwise sourced. See full disclosure information. If you have any questions you can contact me or leave a comment.

14 shares
Dad's View of #Breastfeeding is Important!
← Read Last Post
A Tale From A Year Ago Today: We Found Out ~ It's A Girl!
Read Next Post →
Click here to cancel reply.

I love the short stories by Pixar...they are sooo funny! I am not a fan of Cars...at all. But looks like you had a great time! :)

Great Review Darcy! Makes you wonder what they were thinking~as I don't allow my grandchildren to say I am going to kill you.

I am so jealous!! I had no idea of violence and death in it either. Thanks for the warning. My boys have been very curious about death and why things die since our fish died...I get a question of some sort everyday. Great post!!

You are so lucky to have been able to attend the early screening. I, too, was invited in my area but am on vacation so was unable to attend. Anyway. Another friend, who got to attend the premier in LA, said the movie might be better for ages 7+. We were planning on taking my 6yr old and almost 4yr old but I'm now debating if it's a movie we'll wait on. I'm really a bit bummed that they didn't gear the movie towards the younger kids knowing how they make up the biggest part the viewing audience.

Yeah, I think it's probably best reserved for older kids. I'm kind of glad I didn't get to take my nephews after all...