<< Initial Impressions of the 2012 Kia Sorento 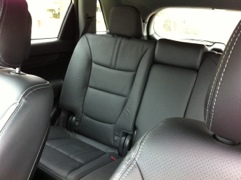 Last time I showed you some raw footage I took with my iPhone of the 2012 Kia Sorento. I gave you a look at the vehicle from my perspective and talked over a few points. So it looks pretty and roomy, but what about the all important question of car seats. Are they easy to install? How many can fit? Where do they go?

The back seat is pretty roomy, which made it easier for me to get in and wrangle the seat. I took a quick look at the vehicle’s user manual about car seat installation. It indicated that there are latch hooks in the seats that may be used rather than the restraint system. It also had information about how to thread it through the back of the seat for forward facing car seats. Rissa is still rear facing, so I focused on the latch hooks.

I took the car seat out of my husbands vehicle, a Malibu. I had a fun time trying to get the latch hooks off because they were in a ways in the seat. Once I managed to do that, the real fun began! On the Kia Sorento, the seats clearly mark where the hooks are, so they were super easy to find. They weren’t buried too far deep, which made it simple for me to hook them. My only issue during the installation was with tightening the strap for the latch hooks to keep the car seat immobilized. But, that was an issue I was having with the car seat itself NOT the vehicle. 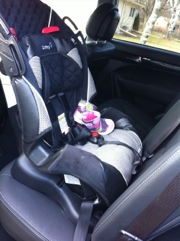 I had to get used to Rissa being on the driver’s side of the vehicle. While I was pregnant, I read that the safest location for the car seat was in the middle of the back seat. Unfortunately, when we went to get our infant car seat installation safety check at the local police station,  we had to move them to the side. The middle of the seats just weren’t very good for keeping the car seats level, for one. The police officer recommended installing the seats on the passenger side so when parked on the street, we wouldn’t be next to traffic as we put baby in and out of the car.

For a year plus I’ve been used to the passenger side. It was awkward at first to secure Rissa in from the driver side. The height of the Sorento was nice because I didn’t have to bend down though! So why couldn’t I put her on the passenger side? Well, there are latch hooks on the passenger side, but then you can’t flip the seat to access the third row seat. You can easily and comfortably fit and install TWO car seats in the back seat, but then it’s harder to use the third row. I’m not sure you could fit three car seats across. There aren’t hooks in the middle (since that can also be an armrest with cup holders), but since there’s a lap belt, you technically could install a seat there. I think it’d be a tight fit. I didn’t not have access to a third car seat or base so I wasn’t able to try it.

A – for ease of installation of a rear facing car seat

C – for ease of use of multiple car seats

We are planning on trying for a second child, so we’ll need to have the ability to comfortably have two car seats installed for a few years.

How important is fitting multiple car seats to you? What about losing the ease of use of the third row?

Disclosure: I was provided a 2012 Kia Sorento to test drive free of charge and was provided a gift card to cover gas for the vehicle. Unfortunately I had to give the vehicle back! No other compensation was received. All thoughts and opinions shared are mine and not influenced by the PR company or Kia Motors. 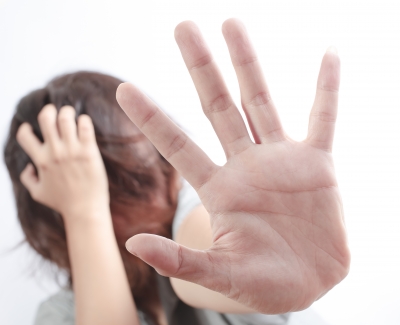 this is really good information, being a grandmother things have really changed since my kids were little, thanks for the info

Informative. My daughter was always on the passenger's side. After my son was born, he went on the driver's side and because he was quite most of the time, I was always afraid that I forgot him (since I couldn't see him)

What a nice car and such an important thing to consider when making a new vehicle purchase!

I have 2007 Hyundai Sante Fe and the car seat started in the middle but has since been moved to behind the passenger seat because it was easier to little man into it. We did have to move the passenger seat up but there is still plenty of room for most people. Now he is forward facing and we get a great fit. I do worry about when we have two carseats but I think it will work out great. These are issues I never considered before! :)

Wow, good catch on that third row thing. If a larger family was in the market for this, it would greatly affect their decisions. For instance a family with 3 or more children, 2 in car seats, would have a difficult time getting the additional children in the 3rd row. Like you, I'm trying for baby #2, but my first will still be in a carseat for a while.