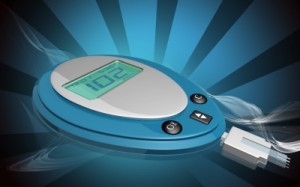 For most women, blood sugar levels aren’t usually a concern as long as they are healthy. However, for women with diabetes or at a greater risk for developing diabetes, it is a concern. I have family history of diabetes, which puts me at risk of developing Type 2. With my last pregnancy, I was diagnosed with gestational diabetes (GD) around 15 weeks which is VERY early. Gestational diabetes generally does not develop until the third trimester when your body becomes increasingly insulin resistant.

When I was diagnosed with GD, I was very upset. I felt like it was my fault when it really wasn’t in my control. Sure, I could have lost more weight and been healthier overall prior to get pregnant, but that doesn’t guarantee no diabetes. I cried, then learned how to control it the best I could with diet and exercise. Unfortunately, that was not enough. My body just couldn’t process glucose correctly and required the aid of insulin. Since it was all so early in my pregnancy, my OBGYN was convinced I was undiagnosed Type 2.

I’m not though. I went through testing for diabetes a few years prior and was on the high end of normal range, but not in diabetic levels. I also had my A1C test done when I was diagnosed with GD. The A1C test measures your average blood sugar level for the past 90 days based on readings in the hemoglobin in your blood. Normal is under 7. Mine was around 5.4.

Then after I gave birth, my levels went back down to normal after meals and upon waking. My doctor seemed surprised, but I was thrilled to know I was right that I wasn’t diabetic… yet. Having GD greatly increases the chance of developing Type 2, so it seems like it is in the cards for me. It’s just a question of when at this point. I keep doing whatever I can to stave it off!

It was a great relief to know my A1C was normal. During the first 7 weeks of pregnancy, the baby’s organs develop and if the mother’s blood sugar is too high it can cause birth defects. That was scary to me. Very scary. I also learned that having uncontrolled blood sugar throughout my pregnancy was not good for development and increased my chances of having complications at birth.

I was pretty diligent about my numbers  – only allowing an occasional indulgence that put me over. (I was assured that occasional spikes were okay and considered normal. Consistently high blood sugar was dangerous though.)  Despite the fact that I had to report my numbers to a nurse weekly and that I’d proactively contact her when I noticed my numbers getting higher (meaning I needed an insulin dosage increase prescribed), the doctors continued to do A1C tests periodically to ensure I wasn’t lying about my numbers.

Well, I had a pretty good birthing experience. The hospital kept my numbers under control while I labored (a spike then could cause baby an unsafe drop after the cord is cut) and I gave birth to a 6lb 10oz beautiful baby girl. Her weight was an indication of well controlled blood sugar, they said, since diabetic women tend to birth larger babies. The extra blood sugar apparently makes them gain around their middles, which also makes it harder to push them through the birth canal.

Anyway, my point is… I’m likely to develop gestational diabetes again.  And with my risk for developing Type 2… I can’t be too careful. It was recommended to me to continue having my A1C tested. I did so a few months after giving birth and then had it tested again February. I needed to know my levels were normal before trying to get pregnant again. That way I at least know baby #2 has a healthy environment to start out in. My doctor and I will just have to stay on top of my levels after that and watch for the development of GD again.

And yay – still in the 5 range. So, that was the final green light we needed to start trying again.

Let’s just hope that if I develop it again I get out of the second pregnancy without developing Type 2 as well.

For more information about Pregnancy and Diabetes and Gestational Diabetes, please visit the American Diabetes Association.
___________
This post is for informational purposes only based on my experience and research. It is not meant to replace your doctor’s medical advice. Always seek treatment from a professional as I am not one.
___________

I hope you're able to avoid the GD during this pregnancy. I think just knowing that you're at risk puts you well ahead of the game.

I hope by some miracle I don't develop it again, but at least this time I'll know what I'm doing and know how I need to eat and inject. Last time was so scary I even had to be taught how to inject the insulin.