This One Time We Met Dr. Seuss’s The Lorax…

While we were in New York City for BlogHer12, we met a fuzzy orange “guy.”  As we walked out of the Expo Hall, we came upon the Lorax. He was posing for pictures with people and a small crowd had gathered around him. I was wearing Rissa on my back throughout the hall and she started to doze off, but as soon as she saw the Lorax she perked up. 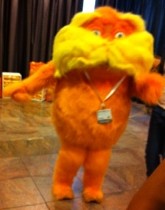 She excitedly tried to peer around me, pointing and exclaiming “guy, guy!”  I always thought his name was Lorax, but apparently his name is Guy. After those waiting before us had their turn, I decided we should get a picture with him too. However, there wasn’t a true line formed so it was hard to figure out when it was our turn. I did my best not to cut in front of anyone. 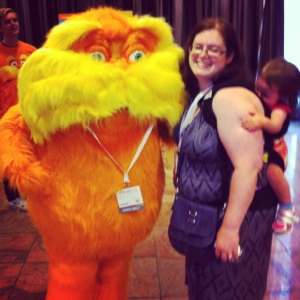 Unfortunately I mistook Rissa’s excitement for wanting to get closer to Guy. As I approached him and put an arm around him, she started to cry. Her little finger nails dug into my arm as she clutched me in terror, hiding against my shoulder. See, I thought if he’d be scary to her it wouldn’t matter the distance, but he was only scary up close.

I made my husband take a quick picture anyway.

All the way back to the hotel room Rissa went on and on about Guy and how mommy hugged him and she cried. Her story was adorably tragic and she still tells it a week later. I felt bad about scaring her – I really did! I thought it’d be a cute photo opp… at least we know to wait a few more years before going to any theme parks with costumed characters! (Or even Times Square… characters are everywhere down there, especially at night.)

After our 5 hour flight delay and getting home so late, I didn’t even think about the packages that arrived while we were gone. As I went through them the following day, I opened up this… 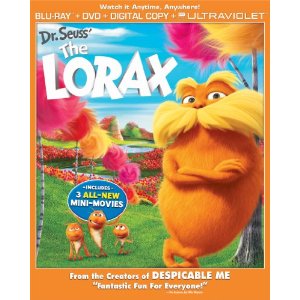 We showed her the movie case to which she excitedly exclaimed, “Guy!”  She looked… happy. I mean, she was excited and asked to watch it… was this really the same child who was terrified of the Lorax up close and personal?

She enjoyed watching it with us (she’s getting so much better at sitting through movies!) and would ask where Guy went when he wasn’t on screen for awhile. There are a lot of great features included too, like the mini-movies! I think Rissa laughed the hardest during Wagon Ho!  There are also games and behind the scenes features such as learning about adapting the popular children’s book to a movie.

Have your children met movie characters before? Were they scared?

The imaginative world of Dr. Seuss comes to life like never before in this visually spectacular adventure from the creators of Despicable Me! Twelve-year-old Ted will do anything to find a real live Truffula Tree in order to impress the girl of his dreams. As he embarks on his journey, Ted discovers the incredible story of the Lorax, a grumpy but charming creature who speaks for the trees. Featuring the voice talents of Danny DeVito, Ed Helms, Zac Efron, Taylor Swift, Rob Riggle, Jenny Slate and Betty White, Dr. Seuss’ The Lorax is filled with hilarious fun for everyone!

BONUS FEATURES EXCLUSIVELY ON THE BLU-RAYTM:

·      ULTRAVIOLET™—The revolutionary new way for consumers to collect movies and TV shows, store them in the cloud, and download and stream instantly to computers, tablets and smartphones. Currently available in the United States only.

·      DIGITAL COPY—Viewerscan redeem a digital version of the full-length movie from a choice of retail partners to watch on an array of electronic and portable devices.

Disclosure: We received the movie to review and no other compensation was provided. We had no idea we’d be meeting The Lorax but it sure added to the whole viewing experience!

Oh how fun! My kids were always scared of costumed characters when they were little too. They are getting better as they get older so hopefully your daughter will too.

It seems common enough, I just found it odd she was SO excited a few feet away lol

cute! I wonder what your daughter was thinking?

Erika @Musings From a Stay At Home Mom

I love the Lorax - it's one of my all-time favorite stories!

I know I read it as a child but I couldn't really remember much except the puffy trees.

Both my kids were scared of Santa up close and personal and acted the same way when I tried to have their picture taken with them.

We haven't attempted Santa yet... might put that on hold a little longer after this incident!

Hugs hun, I doubt you scarred her for life... glad you all enjoyed "Guy" on DVD!

I hope not! I know I have a long standing and deep rooted dislike/fear of clowns.. not entirely sure why!