Should Children Pretend to Breastfeed? 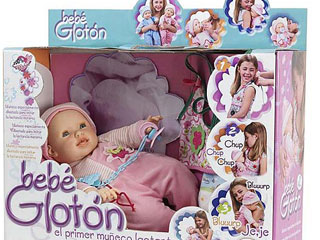 Who knew a child’s baby doll could be so controversial?

And yes, I’m going there. Just a little.

You see, Rissa is almost a year old. She’s starting to imitate us more and (I think) is starting some pretend play. She’ll tip and tap an empty water bottle like shes pouring it. She’ll “munch” on her fake carrots. Oh, and she’ll open a book and babble while pointing at the pictures. This doll is for ages 2+ and frankly, this first year went fast enough that I need to start thinking about what’s going to happen when she’s 2!

I know I did a lot of pretend play when I was younger. I even remember pretending to breastfeed a couple dolls. I’m not sure why I mimicked that, in all honesty, because I wasn’t around anyone nursing when I was 4 years old… that I remember anyway.

I was a combo feeding mama to my dolls. They were given bottles and brought to the breast. I didn’t just put them in the nursing position across my chest, I lifted my shirt, stuck my doll under it and would hold it there for a bit. (I was asked not to go under my shirt.)

Given my own pretend play as a child (and not having my own child until I was nearly 30!), I was confused when I first heard about people being upset over a breastfeeding doll, I admit.

Why were they so up in arms?

Well, it seems the majority for those who are offended by it think it is sexualizing young children.

Personally, I take more issue with things like young girls looking like adults in pageants with make up, teased hair, and sexy dance moves. And some of their pop idols… and what’s with those Bratz dolls? You know those dolls won’t be having a white wedding… oh and violent toys like guns. Toy guns raise criminals right? (I’m being sarcastic.)

But I still wouldn’t buy it!

Huh? Yes, it’s true. I wouldn’t get it. I support breastfeeding. I like the concept behind the doll, but I don’t much care for it itself. But, I’m not going to say some other child shouldn’t play with it either.

I saw a picture the other day of a little toddler pretending to nurse a doll, and my immediate reaction was shock. And then I thought, Wait a minute, little girls give their dolls bottles all the time, so why do I feel weird about this?!? Anyway, I thought about it, and think it is more than acceptable, although its interesting that I had the first reaction I did...

I admit I think having a special doll is a bit weird but I think it makes sense for kids to feed their dolls the way they know! My daughter has started putting her dolls to ME though lol

I don't see anything wrong with the doll.... I agree with the others who say that a child could use any doll to pretend to breastfeed.

My daughter has a doll that she will pretend to Breastfeed (she was 2 when started to this) and I think its funny. I agree, no need to have a doll JUST for that, little ones can pretend. Kid's imaginations are just fine without all the extras. Like the barbie they had on the shelf a few years back that actually had a baby in her. Odd.

Anything to drive controversy and make a buck it seems! The concept may have good intentions but the end result doesn't work out so well.

My daughter pretended to breastfeed her dolls all the time when I was nursing my son - it made me SO happy to see her do that! Children imitate what they see around them - there is NOTHING wrong with that!

That's one reason why I think the doll is unnecessary - who needs to pay so much when they can imitate nursing any doll they have! (It'd make me happy to see my daughter do it too) :)

I don't see anything wrong with the doll at all. I also wouldn't buy it because it's too expensive and you could breastfeed any doll you wanted

Price will probably be the biggest factor for a lot of people. So many other toys and things you can get for the price of one magical bfing doll!