You are here: Home / Babies / How to Easily Keep Track of Your Newborn’s Needs
2shares

With my first child the hospital trained me well on tracking and logging feedings and bowel movements. A little too well. I was a bit of a logging fanatic even though it was helpful. When you are sleep deprived and getting into a routine it's very easy to forget when you last ate, let alone when baby did. Or which boob they nursed from last.

I was adamant on maintaining the logs and would count the number of feedings and diaper changes within a 24 hour period in order to reassure myself that Rissa was getting enough breastmilk. Seriously when unable to accurately measure her intake it caused me some worry. However, I knew to look for other clues as to whether or not she was eating enough.

The logs ended up being too much work though regardless of how informative they were. I rarely referred back to them, but they helped me keep my head in the game. That's all I really needed as I gained confidence in my parenting skills.

For baby #2 I like to think I'm wiser. I'm learning from my first time mom worries and over-the-top perfection seeking to bring me back to reality.

Okay, so I never was perfect and quickly learned chasing the idea of being the ultimate mom was only going to cause me more stress.

One lesson I did learn was some sort of tracking is extremely helpful in the beginning. I'm too much of a sleep deprived scatter brain.

Another lesson I learned was communicating with my husband about when I did things for the baby (or vice versa) was important too.

With a toddler running around who likes to draw on herself with pen…my traditional pen and paper log is definitely a no go. That's okay though! I found a better way to track feedings, diapers and sleep… 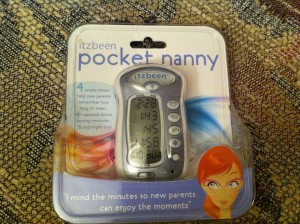 It's super simple to use and pass back and forth between caregivers. Finished feeding baby? Press the bottle button. Changed a diaper? Press a button. Laid baby down for a nap? Press a button. Once you press a button it starts a timer so you can see how long ago you did one of those things. If you need a reminder to do something in 2 hrs (for example) you can also set an alarm. And on the bottom you can keep track of which breast you last nursed from.

I'm not about putting baby on a schedule and totally subscribe to following cues (particularly when breastfeeding), but this can help keep you from going completely insane. It's also helpful for caregivers other than yourself, I think. In the very early days it was important I didn't let Rissa sleep too long during the day so she was eating enough. It took a little bit before I could rely on her to wake when she was getting hungry instead of sleeping until she was ravenous.

I wish it let me keep count on the number of diapers used in a day as that was a better indicator that she was getting enough to eat. I also liked tracking pee versus poop. So there's room for some improvements, but overall I can see this coming in handy this time around. 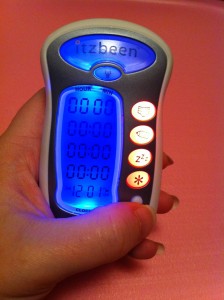 For nighttime use there's a backlight for the buttons and there's also a nightlight you can use. Oh and if you're worried about your toddler accidentally resetting everything – worry less! There's a “lock” button on the side. If they don't slide that off, you're golden.

How did you keep track of baby's basic cares in the early days? Were you an obsessive tracker like me?

Disclosure: We received a Pocket Nanny for review.

Previous Post: « Get That Out of Your Mouth!
Next Post: What Would You Do If Your Baby Was Breech? »