An Open Letter to Netflix & Viacom

All activities require adult supervision. This post contains affiliate links. As an Amazon Associate and a participant in other affiliate programs, we earn a commission on qualifying purchases.
12 shares

My heartbeat quickened in my chest as I read the words Tahlia posted on our Facebook page: Yo Gabba Gabba is missing from Netflix.

No, this cannot be! Why would they pull it? What is the meaning of this? It must be a mistake.

But it is true.

And it’s not just Yo Gabba Gabba that’s missing…. 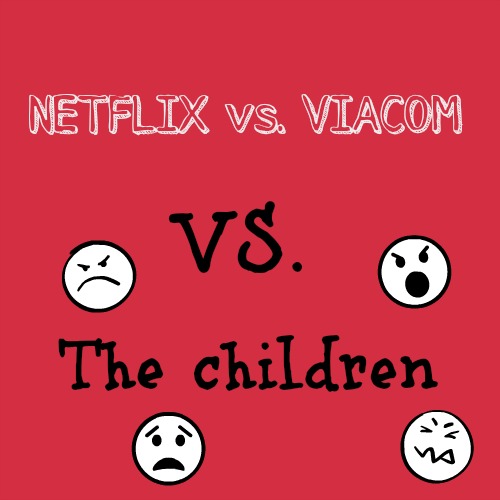 I received troubling news the other day that I didn’t want to believe. However, the evidence was right there on my television screen. My daughter asked to watch one of her favorite shows, but it was not there.

I scrolled and searched.

I could not find it.

No Yo Gabba Gabba, no Dora, no Diego, and no Blue’s Clues.

Her top 4 shows – gone with nary a warning.

I know I’ve joked about the annoyance of listening to Dora for hours at a time, but those shows kept her the most entertained AND helped her learn. Most of the other options in the Netflix kids section are… well… not up to par.

We routinely act out episodes and sing the songs. Those shows have helped my daughter with learning to count (in English and Spanish), animal facts, following directions, and various other life lessons. I can only imagine the amount of tantrums this change has caused across the country.

So why? Why have these shows been ripped away from preschoolers? Who’s to blame? Netflix? Viacom?

At Netflix, we program for our members, we are selective about what titles we add to the service and what content agreements we renew. Since we can’t license everything and also keep our prices low, we look for shows and movies that deliver the highest member engagement relative to its cost. We also put a big premium on exclusivity. For this reason, we have decided not to renew our Viacom content including the Nickelodeon titles.

And really… Netflix, the excuse you gave to Toledo News Now read like this to me:

Sounds like BOTH of you have positioned yourselves as bad guys in this scenario. It’s a no-win situation. You should have hired a couple toddlers to work your negotiations. They are pros at that shit!

Just think of all that marketing to kids opportunities that vanished, Viacom. My daughter wouldn’t have developed her deep seated love for Yo Gabba Gabba and the other Nick Jr shows and thereby getting lots of merch bought for her… like the new character shirts I got her just a few days ago.. the two sets of YGG beanies we own (the first set are so well loved they have no eyes). 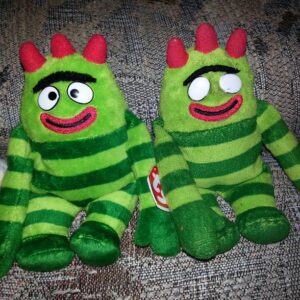 Can you spot the differences?

Now my daughter is kind of feeling like an eyeless Brobee.

There’s nothing sadder than that. Oh wait… 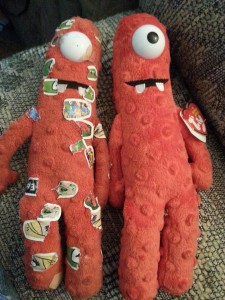 Please, reconsider working together. Think of the children and the parents that live with them. Cuz right now, the only way I know how to explain corporate contracts to a 2 year old is to tell her that you clearly hate children.

Darcy – a sometimes frazzled crappy mom who uses Netflix to entertain her kid.

P.S. That was a bit harsh, but this is probably my biggest first world problem right now.

P.P.S. You are lucky you brought back Arrested Development otherwise I’d threaten cancellation. That and my husband isn’t as bothered by this as I am (he gets to escape every day) and the account is in his name.

P.P.P.S. All joking aside – it does suck.  Thankfully we bought newer episodes of YGG on Vudu.com, have access through Amazon Prime (though it it not as user friendly), and some shows are available right on Nick Jr’s site. Oh and all those DVDs we’ve received and bought. But still. 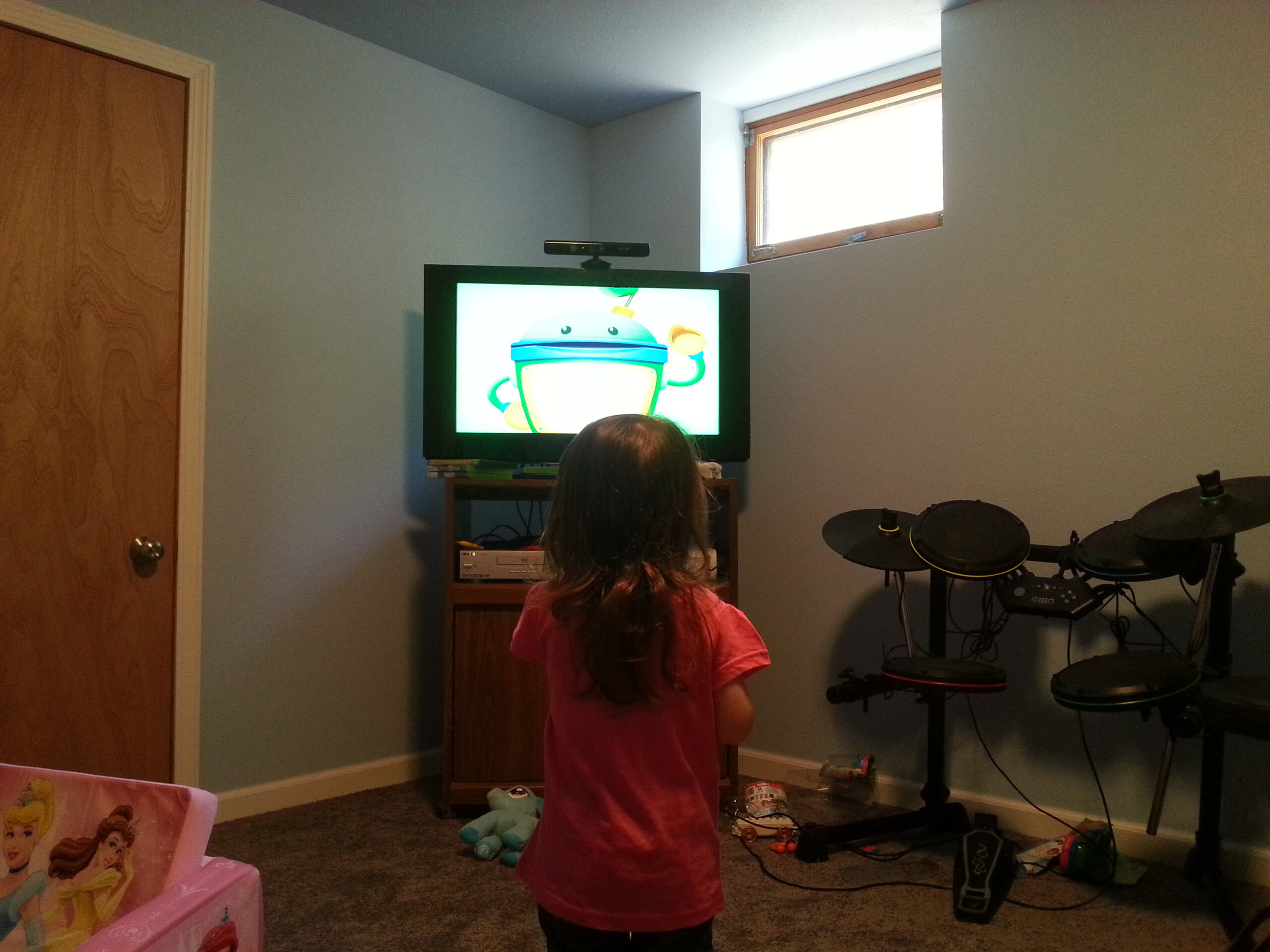 4 Ways to Help Kids Overcome Their Fear of the Dark
Read Next Post →
Click here to cancel reply.

Viacom tried to pull this stunt last year with Directv. Directv wouldn't have it and laid down the law. Sadly, Viacom still denies viewers around the world the right to view full episodes on their own websites now as I keep running into that myself. It was the worst month or so ever as a consumer. Sounds like that conflict is still repeating. Boycott Viacom is the only suggestion I have because they are using kids as pawns to get more money.

They totally bite. I also cannot show spongebob to my son anymore which caused a full blown meltdown! Seriously?? These all out business wars that companies are lodging against each other in the name of a dollar hurts our pocketbooks and our kids. I am waiting on my Direct TV contract to end. By the time they add on taxes fees, and whatever else my $59.99 package costs me over $150 a month. Apparently after the first honeymoon year, your rates are more because well, they hate you and have you by the balls. Tired of paying so much yet never having any tv to watch. I'm going to purchase Redbox streaming, hulu streaming and continue with Redbox. Screw tv!

Yeah cable is a joke now for sure... and I never understood why new customers got great cheap deals all the time while loyal customers paid an arm and a leg. Now I know why my parents cancelled our cable off and on when I was growing up! Also that package you got - almost $100 higher than advertised is such a crock!

My boyfriend brought the missing shows up to me. And those shows are EXACTLY what our son watches and what his grandmother can calm him down with when he throws a "I want my parents" fit. Thankfully we have most on DVD but it was much more convenient for his mother to flip on the Xbox and play them rather than us remember to bring a DVD over and take it home. Disappointed.

A year ago YGG was really the only show Rissa paid any attention to. This would have been tougher for us then, but I know what you mean. I think a lot of parents are feeling this and it's just so sucky! I mean, I'm glad she's liking Jake and the Neverland Pirates but that's one added show when they removed a huge selection.

We gave up Netflix a few years ago because at that time, their streaming section was sorely lacking. It felt kind of like quantity (as many cheap shows as we can possibly push) over quantity. Sounds like they may have added to it only to take it away. Maybe like a loss leader at a grocery store - get you in, hoping you'll stay & pay for the other stuff after the sale is over.

We switched to Amazon which has a much larger selection. And Dora, Diego, Yo Gabba Gabba, Blue's Clues - they're all there (plus many more), and all free with Prime (which we would have, anyway, with as much as we shop there). Head over there so Rissa doesn't have to cry! :D

I need to start using Amazon's streaming more. We definitely have Prime with as much as I shop on there! I understand that it is business but sometimes... well.. business sucks when you don't think about your customers.

I didn't even realize Blue's Clues was gone either. :(

My hubby mentioned it over the weekend, before Netflix released the new season of Arrested Development, that we would go to Amazon after its release, lol. My biggest issue with exactly the user-friendly one. My toddler cannot navigate through the menu as easily as Netflix Kids...and sometimes I'm not in the mood to scroll through each title and ask "Do you want to watch (fill in her handful of favorite shows, minus the missing ones, of course)?" We may just grab the DVD's of YGG! and stick with Netflix. Who knows, maybe there will be yet another streaming service available because of this SNAFU. And yes, total first world problem, but when it's something that affects our children, you get an angry mom mob.

One thing that's irritating about DVDs for these shows is I can not find season sets. They are in themes with only a handful of episodes. Have you spotted full season sets anywhere?