Have you ever wondered what goes on with your beloved video game characters when you aren’t there playing the game? Disney’s Wreck-It Ralph takes you on a journey behind the scenes after the arcade closes and the days work of being a game avatar reaches quitting time. I loved the way they set it up like the game is their day job and they are free to leave and hang out in Game Central Station or in another game world when no one is around to pop in a few quarters. 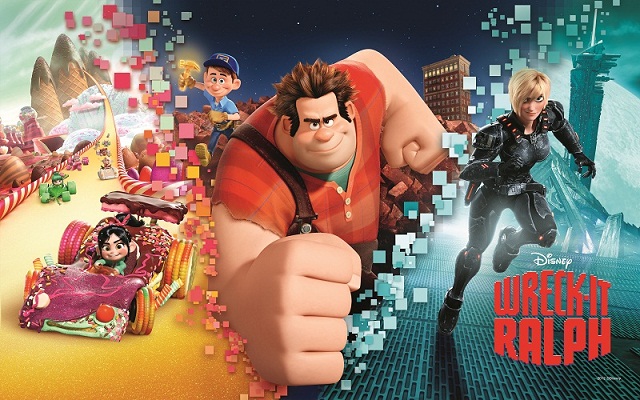 I’m going to do my best not to include any spoilers, because I don’t want to give anything away. The movie starts out giving us a glimpse of gaming evolution at an arcade over 30 years as we meet Wreck-It Ralph, the bad guy in the game Fix It Felix Jr. Ralph turns to a bad guy support group because he’s feeling lonely and out of place. He doesn’t want to be treated like the bad guy after his work day is done, but everyone seems afraid of him. 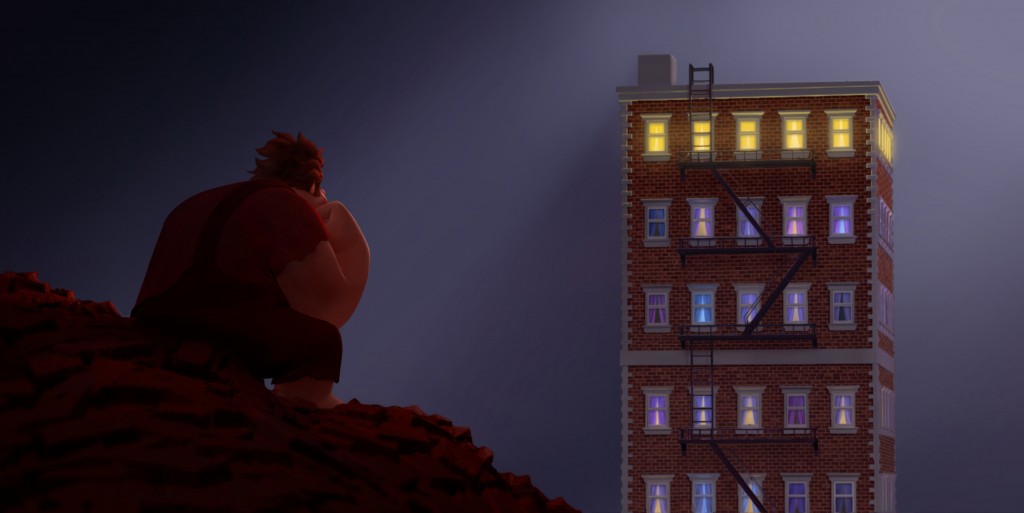 Ralph then embarks on a quest to prove he’s more than just a bad guy – hoping it will change how others view him. He jumps into another game despite the dangers of doing so putting himself and other game worlds at risk. Along the way he meets Vanellope in the Sugar Rush racing game. At first they are working against each other, but slowly they become friends as they realize they both are facing similar issues within their game worlds. They both are looking to prove themselves in order to rise from the low rung on the totem pole.

As they start to work together, it becomes clear that Ralph struggles with controlling his temper and wrecking urges, while Vanellope struggles with glitching in the game. In the end, they must embrace who they are and their programming.

But that’s just the short version without any of the jokes, tears, and unexpected surprises that pull this film together.

I’m a fan of John C. Reilly (Ralph), Jack McBrayer (Felix), and Jane Lynch (Sgt. Calhoun). I’ve seen them in several other movies and am feel like I know their comedy style. Brian and I were talking about how fitting every voice was to their character’s personality. Take McBrayer for example, he often plays the role of the sweet good guy who has nothing but the best intentions. Who better than to play Felix?

I’ll be honest, I’m not generally a fan of Sarah Silverman, but she nails it as the annoying yet endearing Vanellope. It felt like Disney really took the time to carefully match up the characters with their voice actors. The end result was the perfect mix of comedic actors who can also show a range of emotion in their acting. Well played!

2 – Gaming References are a Bonus for Gamers

Being a movie about video games, there are obviously game references. If you are a long time gamer, you’ll “get” more of the references and appreciate the subtle humor they lend to the movie. Best part though? If you aren’t a gamer, you won’t feel like you are missing the point of the movie.

The story is set within the gaming world but it isn’t just about the game – it’s about people and connections. So while the homages are there to many classic games and inside jokes (hello Contra Code!) they don’t dominate the story line. They are mostly there in the background where you’ll notice it if you are paying attention.

3 – Labels Don’t Dictate Who You Are

Ralph and Vanellope feel trapped under the labels put on them by their gaming worlds but they both believe they are more than just a bad guy and a glitch. Though at times those labels create self-doubt and loathing. It’s a reminder that labeling each other can be harmful to our self-esteem and how others perceive us. It’s also a reminder that a label is just that – a label. It doesn’t mean that is WHO you are, just a part of who you are.

I’m not entirely sure if the glitch label was meant to be a connection with special needs, but it came to my mind at the end. (Warning: Possibly considered spoilers) And it pulled at my heart strings when Vanellope doesn’t give up her glitch when she has the opportunity to be “normal.”  Instead, it’s part of who she is and what makes her unique so she embraces it. And…. well, they learn that it doesn’t need to be hidden from others because the gamers love her just the way she is.

And Ralph? Just because he wrecks things doesn’t mean he’s bad. He might be the required bad guy in his game, but he can be a friend after work. In one game, wrecking is bad, but in another it makes him a hero. (That’s the closest to a spoiler you’ll get from me!)

4 – It Packs an Emotional Punch

This movie made Brian and I laugh out loud at several points, but was also sad at others. Brian said there were a few times it was definitely sad, though he didn’t cry like me. It wasn’t all out sobbing crying, but I had tears well up in my eyes at a couple points and at the end they spilled over. (Kind of a happy cry at the end though!)  The story hooked my emotions, making me care about the characters. At one point I heard a child in the audience say, “This is a sad game.”  I was feeling it right along with them. Heck, it even made me think about the connection to tough parenting decisions.

5 – Enjoyable for Kids and Adults

I think this film is great for children and adults. It is rated PG, so parents need to determine if their children can watch it or not. (I would say watch it with them!)  There aren’t any swear words or raunchy jokes. The adult humor is not inappropriate for kids, but not likely to be understood by young children. (They won’t even notice.)  There is some violence and threats of bodily harm. Mostly it is focused on shooting bugs which attack the main characters. There is one or two times I recall hearing one character threaten to kill another. 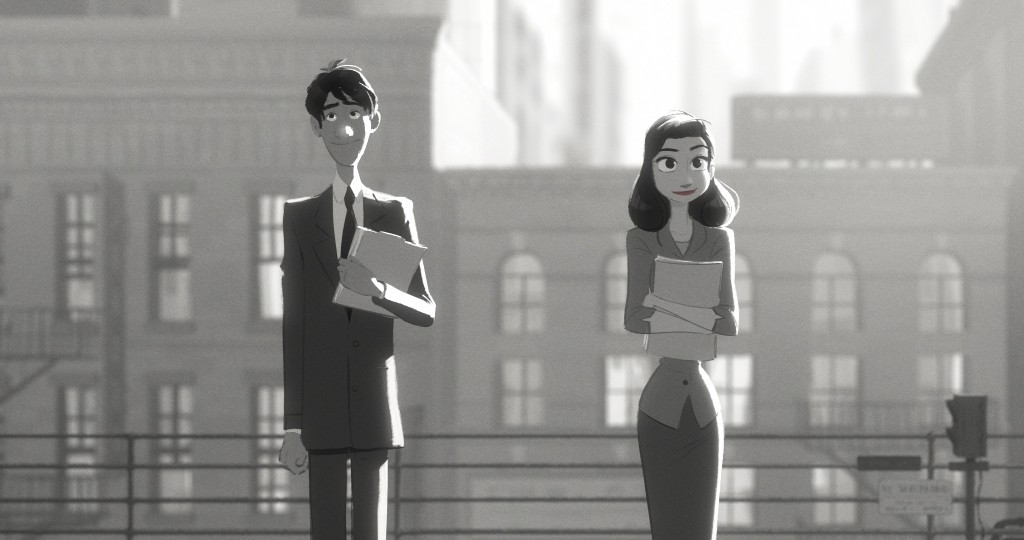 The short before the movie called Paperman was cute. It’s in black and white (except for a pair of red lips) and retains the sketched look. It’s a silent one, well, with no talking anyway. It takes you on an adorable journey of a man and woman who meet by chance while waiting for the morning train. He’s smitten with her right away and tries to catch up with her throughout the day…. and that’s all I can say without giving it away ;)

Are you going to see Wreck-It Ralph? It’s out in theaters starting November 2nd, 2012! If you can see it in 3D I highly recommend it.

Disclosure: I attended a local press screening of this film. Thoughts shared are mine. No other compensation has been provided. 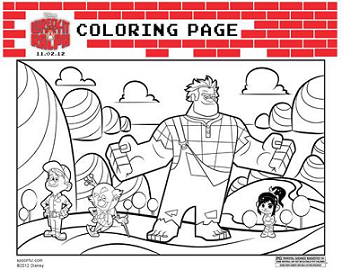 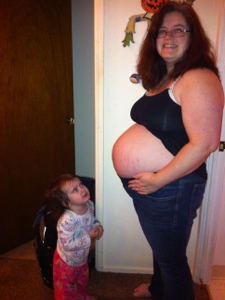 I can't wait to see this! It looks like such a great movie with wonderful casting. I'm glad you loved it.

This looks like such a fun movie; can't wait to take the kids...

I haven't seen this one yet but I can't wait to check it out.

My son just saw it on Saturday at a birthday party. I want to see it too!

Thanks for the review! I cannot wait to see this movie. I am glad it's suitable for adults and children, alike. I need a few good laughs!