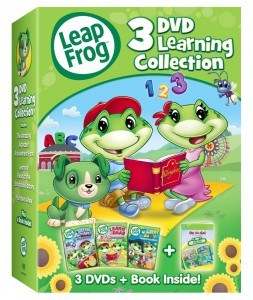 We have another great set of educational shows to share with you. This 3 DVD Collection from LeapFrog is best for 3-6 year olds:

The Amazing Alphabet Amusement Park – Tad & Lily get a call from Fiona about a green puppy stealing a letter from her flower shop. Their new pup, Scout, is the culprit! He dug a hole in the backyard that was filled with lots of letters from several different places. Unfortunately, Tad & Lily don’t know what letter is what. Thankfully Edison the Firefly takes them to the Amazing Alphabet Amusement Park to teach them their ABCs! Of course the rides aren’t on when they get there so they must as they power the rides up. They also learn about capital letters, matching and rhyming.

Learn to Read Storybook Factory – The crew acts out the Three Little Pigs to turn into a recordable story. It teaches grouping letters together to create words and words to make sentences. They also go over punctuation and how to use it to read sentences correctly. They also learn about the elements of a story such as the characters.

Numbers Ahoy! – Tad, Lily & Scout go wild with numbers! Counting and estimation help them free the fish from cages and help the sharks get all their teeth back.

The book, On the Go, is short, colorful, and easy to read. It has short sentences which is great for little ones learning to read. My daughter liked having the story read to her… it helps that she likes The Wheels on the Bus!

This is a nice set to have as it helps teach letters, numbers and reading with the help of cute, colorful animals and sing along songs. I think Rissa (though too young!) really liked the songs. I think her favorites were in Numbers Ahoy and the Alphabet Amusement Park. The Storybook Factory didn’t seem to have as many songs. The Storybook Factory does have large, easy to read words across the screen as they go through the story. They are highlighted as they are read. It’s a good follow along tool.

I think this set is a nice compliment to other learning and presents it in a fun way. While they think they are just watching cartoons, they are developing and practicing important skills!

I love the entire line of LeapFrog products and these look like they would be a great addition to our growing collection. Thanks for sharing the info.

We absolutely LOVE the LeapFrog DVDs! There's not one that we don't love!

This looks like it would be a great gift - thanks for the review!

My granddaughter grew up with Leapfrog so I can highly recommend it.

Love LeapFrog products! Thanks for sharing, I'll definitely have to look into this for when my son is older :)