I try not to limit what types of toys my daughter plays with just because she's a girl. Sometimes it's hard because it just seems like she should have dolls and girly things. However, we do let her wander the toy aisles to check everything out and show us what she is most interested in. It's often the more girl-centric toys, but she does have fun with other toys too, like cars.

From the DUB Garage Blazerz line

When I initially received the DUB Garage Blazerz SUV by Toy State (one of their newest toys this fall!), I wasn't intending it to be for my daughter. It's recommended for ages 6 and up, so I was thinking of my nephews. But that was before I opened the package when it arrived. Rissa got SO excited right away asking for the truck. I had to hide it for awhile because I wasn't ready for us to start testing it out that very day.

She waited ever so patiently (for a toddler…) for the chance to play with it. I wish I snapped a picture of it still in the box, but I let hubby and Rissa open it while I was busy doing something else. (And the toy is so new, I can't find the exact product image of it to share with you!). 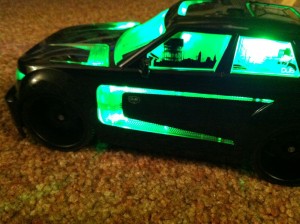 The SUV is black with tinted windows and a boomin' sound system that plays music (just one “song” though). It's tricked out with green lights and an electronic voice reminiscent of Kit from Night Rider. You can push the car around to play with it if you'd like, but it does move if you press one of two buttons on the top of the roof. One will make it peel out and go forward, the other button will drive it in reverse. (It was great fun to scare the cats with when they were in its path.)

My daughter has a slight fear of toys that move by themselves so she won't get close to it when it drives, but she'll watch it from the safety of the couch (and ask daddy to “do it” and keep making it drive). A few other buttons make it say a few things, flash lights, and play some music. Rissa's favorite part is the music. She presses the button and dances, trying to coax everyone else in the room to join her.

It's not a small car, so it does need some space to be played with, but it's certainly the coolest vehicle we own!

The DUB Garage Blazerz line of vehicles will be available on Amazon for the holidays!

Disclosure: We received this toy to review.

Previous Post: « Glittery Glam From Out of This World: The Novi Stars Una Verse Doll
Next Post: My 13 Top Scary Halloween Movies »